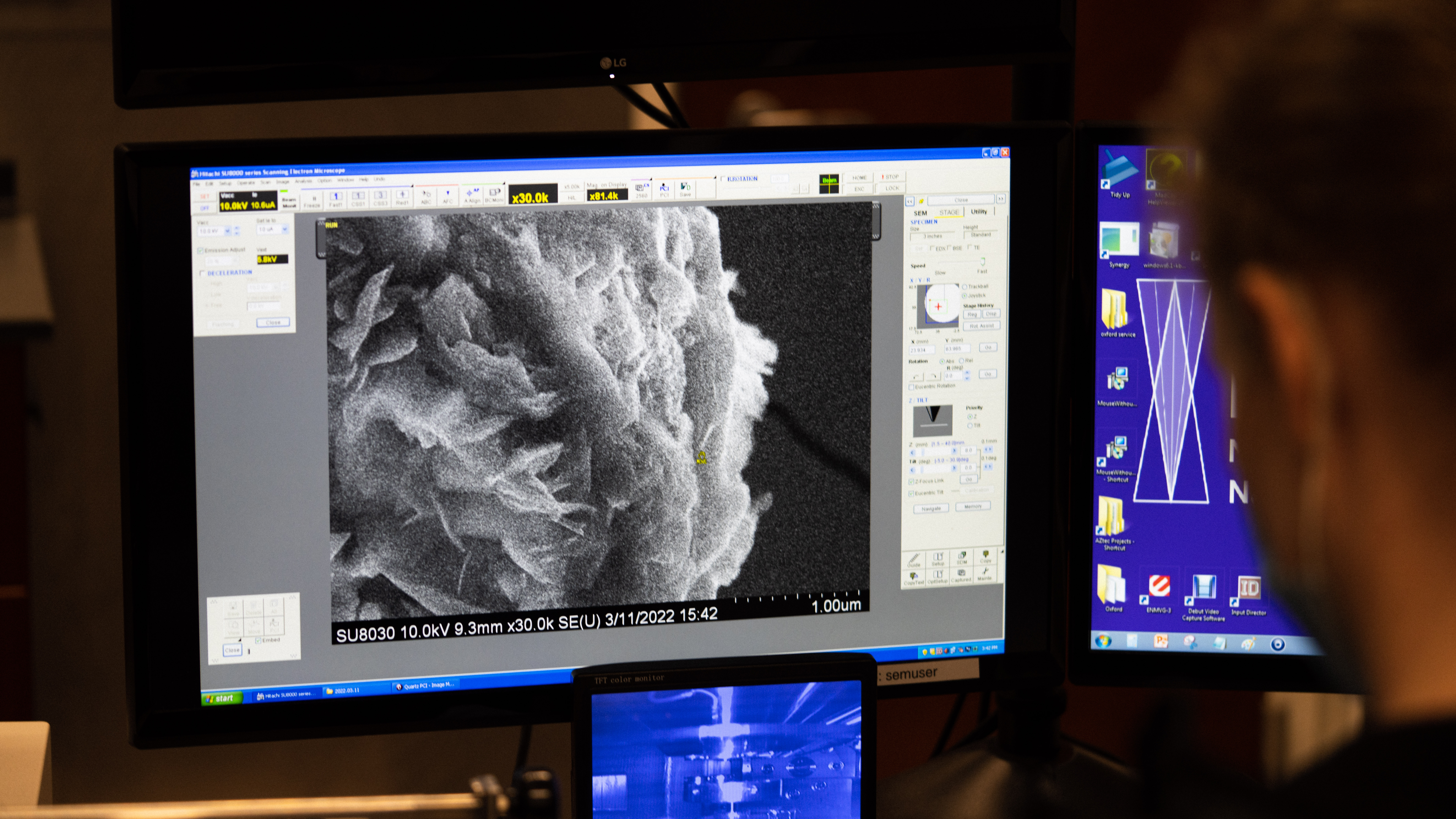 Carolin Wahl, a graduate student in the Mirkin Group, uses a scanning electron microscope to examine materials at the nanoscale.

In the second installment of this two-part interview, Chad Mirkin and Sargent talk about the urgency that drives research in nanocombinatorics, how key technologies in the field were developed, and why industry is excited about this new era in materials discovery. (See also part one on Sargent and Kelley’s move, The interdisciplinary advantage of Northwestern.)

Ted Sargent: Another one of the big attractors for me in coming to Northwestern was the chance to work with you and your collaborators on the Megalibrary technology and nanocombinatorics. Over the last ten years, as I’ve dived into the field of sustainable energy, I’ve focused on decarbonizing electricity and then using decarbonized electricity to decarbonize chemicals and fuel. We have this huge global challenge of reducing our carbon footprint and eventually going carbon negative in order to reduce the concentration of CO2 in the atmosphere.

This is urgent. We have to move with such speed to tackle these challenges. We need to be able to screen remarkably large and diverse sets of materials, and the Megalibrary technology that you and your team have developed is a very powerful way to screen on the scale of millions of distinct compositions per experimental iteration.

This huge chemical space is where we are going to find our hits – it’s where we’re going to find the ability to address some of these key issues. So I’m interested to learn more about the origin story of nanocombinatorics.

Chad Mirkin: It goes back to 1999 with the invention of dip pen nanolithography, which was the first time anybody had developed a way of using atomic force microscopy (AFM) as a depositor of materials, as opposed to a topological reader.

We weren’t thinking about synthesis at all. We were simply thinking about how to make nanostructures on surfaces with a focus on nanofabrication. That morphed into, well, if we can do it with one tip, can we do it with many tips? And we started building the most parallel scanning probe lithography tools on the planet, getting more powerful but also more complicated along the way.

We had an intermediate advance where we began to throw away the concept of an AFM and use the idea that tip-based fabrication is important and could be parallelized by effectively making an array of pyramids out of an elastomeric material, where each pyramid could be a point source for chemicals of interest. There was an “Aha” moment when we realized, this is a way to make materials or gradients on a surface orders of magnitude faster than had ever been done before. These tools were commercialized by an Northwestern startup company called TERA-print so you could now use these commercial tools, with arrays containing as many as 160,000 tips, to locally control chemistry underneath each of the tips and build libraries of materials.

Then the idea of a Megalibrary came into play, and we were off to the races, building chips now that have over 220 million chemically distinct features in a two-by-two centimeter area. That number is enormous even compared to the most sophisticated libraries ever made in the genomics space.

Many of these advances laid the foundation for mining and understanding the materials genome – first being able to synthesize arrays of positionally encoded materials on a surface, and then being able to screen and identify properties that correlate with different structures, and then ultimately being able to use these datasets to inform AI machine learning algorithms that point us toward materials that can make a difference. For example, in clean energy. We think this approach is going to be a way to find materials that make a difference in many areas. It’s so much faster than the old way, the process of trial and error.

Let me ask you, though. When we start a new area like nanocombinatorics, what’s the value added to the institution? What is nanocombinatorics going to bring to Northwestern that it doesn’t already have?

Ted: I think there’s been this widely held recognition for about the last decade that AI, data sciences, machine learning, automation, robotics, high throughput methods – that they have the potential to transform science. And that this potential has yet to be fully realized.

What nanocombinatorics does is it unleashes the true potential. It’s going to allow us to be the institution that showcases for the world that promise can be delivered upon, and that together we can discover new materials and new solutions to meeting society’s needs. Like making America’s high-tech industry even more competitive, and making sustainable development not only a priority – which it is – but also making it into big business, which is what sustainability has the potential to be.

Energy is a $5 trillion industry. It has to be decarbonized, and doing so is a huge opportunity. It’s an opportunity for major disruption – of existing ways of doing business. Energy access and climate inequality have implications for societal equity and social justice. In sum: the stakes are high.

These high-throughput methods enable us to be right at the frontier of these huge societal and economic transformation opportunities. There’s a remarkable opportunity for Northwestern to lead this.

We’ve talked about how Northwestern has outstanding historic strengths in fields like materials and chemistry, and medicine and economics and across humanities and social sciences as well. I’ll add excellence in computer science, computer engineering, applied mathematics, and algorithms too. These are absolutely critical foundations for the kind of work that we’re pulling together in nanocombinatorics. Mechanical engineering and robotics, too. These are areas that will accelerate the advance of this field, but they will also be enhanced by the excellence of this group all together.

Chad: What you think it’s going to do with respect to bringing industrial connections to the university?

Ted: In the last couple of months at Northwestern, when I’ve reached out to prospective industry partners, there’s been a hugely positive response in terms of getting that first meeting with leading corporations that are looking to innovate and transform their businesses. Looking to deliver on their sustainability roadmaps. But that’s just the first meeting.

It’s when I’ve gone into the tools and techniques and strategies that we’re honing at Northwestern to do with high-throughput materials discovery, to do with utilizing and exploiting big data and AI in everything we do, in shortening the times to having commercial and environmental impact – it’s then they’ve really gotten on the hook. That’s when they’ve gotten really, really excited.

By raising awareness that Northwestern is right at the vanguard of this transformation of how science and engineering and translation are done, I think we’re going to see even more remarkable growth in the industry engagement in these alliances that we’re building.