Study reveals how to break symmetry in colloidal crystals 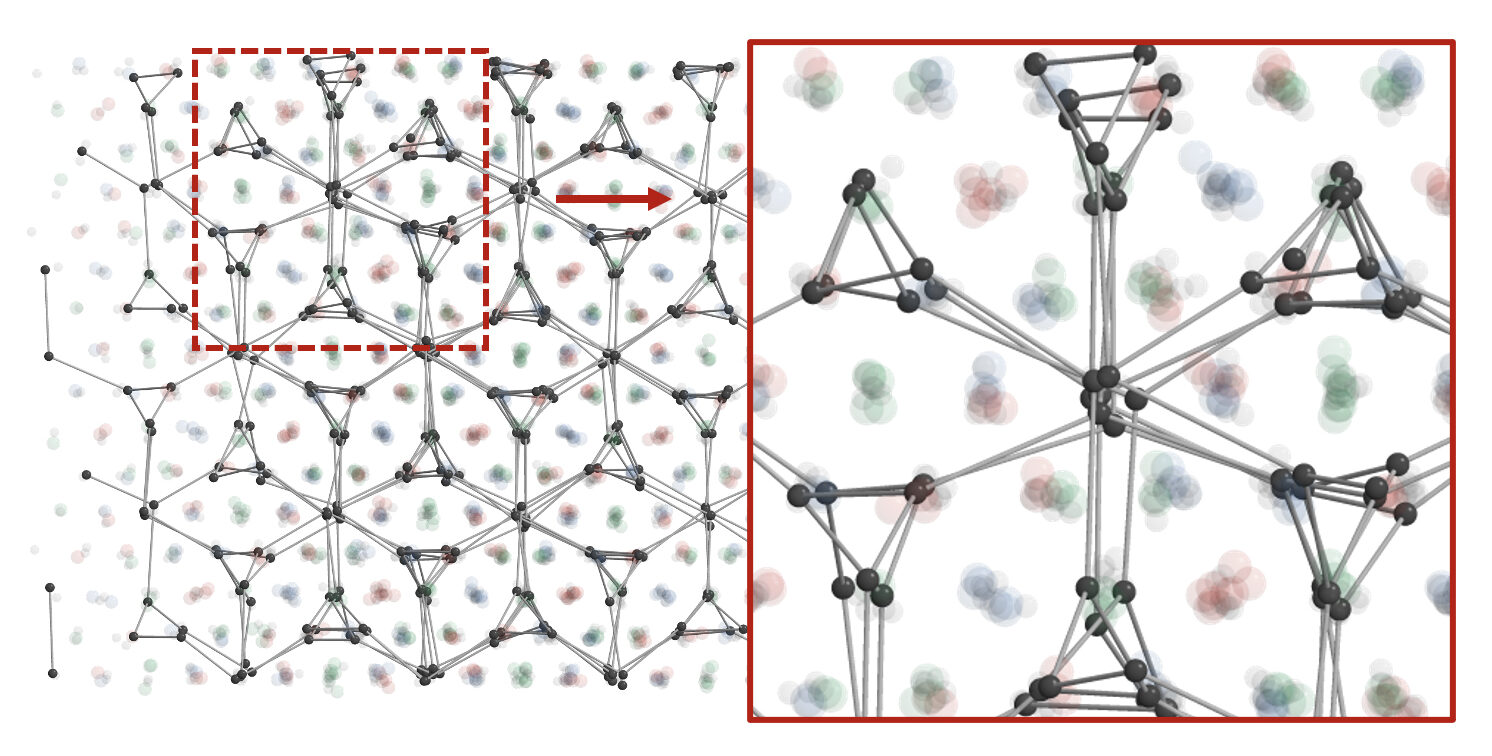 This triple-double gyroid is a new colloidal crystal structure that has never been found in nature or synthesized before. The translucent red/green/blue balls show the positions of programmable atom equivalents (PAEs), while the dark grey balls and sticks show locations of electron equivalents (EEs). (Credit: Sangmin Lee)

Nature keeps a few secrets. While plenty of structures with low symmetry are found in nature, scientists have been confined to high-symmetry designs when synthesizing colloidal crystals, a valuable type of nanomaterial used for chemical and biological sensing and optoelectronic devices.

Now, research from Northwestern University and the University of Michigan has drawn back the curtain, showing for the first time how low-symmetry colloidal crystals can be made – including one phase for which there is no known natural equivalent.

“We’ve discovered something fundamental about the system for making new materials,” said Northwestern’s Chad A. Mirkin. “This strategy for breaking symmetry rewrites the rules for material design and synthesis.”

The research was published today (Jan. 13) in the journal Nature Materials.

The research was directed by Mirkin and Sharon C. Glotzer, the Anthony C. Lembke Department Chair of Chemical Engineering at the University of Michigan.

Nanoparticles can be programmed and assembled into ordered arrays known as colloidal crystals, which can be engineered for applications from light sensors and lasers to communications and computing.

“Using large and small nanoparticles, where the smaller ones move around like electrons in a crystal of metal atoms, is a whole new approach to building complex colloidal crystal structures,” said Glotzer.

In this research, metal nanoparticles whose surfaces were coated with designer DNA were used to create the crystals. The DNA acted as an encodable bonding material, transforming them into what are called programmable atom equivalents (PAEs). This approach offers exceptional control over the shape and parameters of the crystal lattices, as the nanoparticles can be ‘programmed’ to arrange themselves in specified ways, following a set of rules previously developed by Mirkin and his colleagues.

However, to this point, scientists have not had a way to prepare lattices with certain crystal symmetries. Because many PAEs are isotropic – meaning that their structures are uniform in all directions – they tend to arrange into highly symmetric assemblies, and it is difficult to create low-symmetry lattices. This has limited the kinds of structures that can be synthesized, and therefore the optical properties that can be realized with them.

The breakthrough came through a new approach to controlling valency. In chemistry, valency is related to the arrangement of electrons around an atom. It determines the number of bonds the atom can form and the geometry it assumes. Building on a recent discovery that small PAEs can behave as electron equivalents, roaming through and stabilizing lattices of larger PAEs, the Northwestern and Michigan researchers altered the valency of their electron equivalents by adjusting the density of the strands of DNA grafted to their surfaces.

Next, they used advanced electron microscopy to observe how changing the valency of the electron equivalents affected their spatial distribution among the PAEs and therefore the resulting lattices. They also examined the effects of changing temperatures and altering the ratio of PAEs to electron equivalents.

“We explored more complex structures where control over the number of neighbors around each particle produced further symmetry breaking,” said Glotzer. “Our computer simulations helped to decipher the complicated patterns and reveal the mechanisms that enabled the nanoparticles to create them.”

This approach set the stage for three new, never-before synthesized crystalline phases. One, a triple double-gyroid structure, has no known natural equivalent.

These low-symmetry colloidal crystals have optical properties that can’t be achieved with other crystal structures and may find use in a wide range of technologies. Their catalytic properties are different as well. But the new structures unveiled here are only the beginning of the possibilities now that the conditions for breaking symmetry are understood.

“We’re in the midst of an unprecedented era of materials synthesis and discovery,” said Mirkin. “This is another step forward in bringing new, unexplored materials out of the sketchbook and into applications that can take advantage of their rare and unusual properties.”

The study, “The emergence of valency in colloidal crystals through electron equivalents”, was supported primarily by the Center for Bio-Inspired Energy Science, an Energy Frontier Research Center funded by the US Department of Energy, Office of Science, Basic Energy Sciences (award DE-SC0000989) and also by the Air Force Office of Scientific Research (award FA9550-17-1-0348) and the Sherman Fairchild Foundation.

Byeongdu Lee from Argonne National Laboratory is a corresponding author with Mirkin and Glotzer.