By Wende Whitman and Amanda Morris 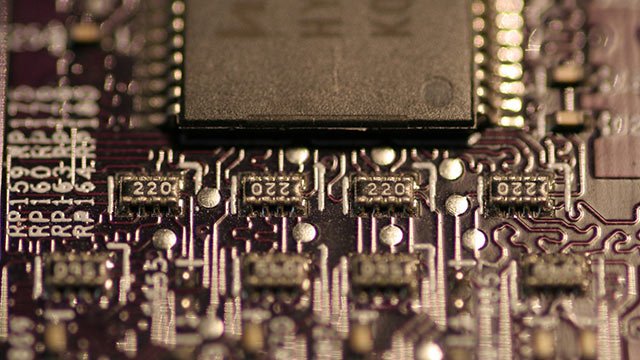 Closeup of a microchip

From slimmer laptops to smaller smartphones, all of our most-used devices rely on increasingly smaller microchips. But, in recent years, researchers have seemingly hit the limit on how far these chips can shrink.

One of the biggest hurdles to putting more circuits and power onto a smaller chip is managing the heat. As chips become smaller, heat increases exponentially. Not only are there more transistors in a given area, which generates more heat in a small space, they also are closer together, making it harder for heat to dissipate.

Now a research team led by Northwestern University and the University of Virginia (UVA) addresses this major hurdle. By exploring an emerging type of material with the potential to keep chips cool as they continue shrinking in size, the researchers have enabled others to continue pushing the size limit of microchips.

The research was published March 18 in the journal Nature Materials. Northwestern’s William Dichtel and UVA’s Patrick Hopkins are co-senior authors of the paper. Northwestern coauthors also include professors Mark Hersam, Michael Bedzyk and Vinod Sangwan. Research teams from the University of Arizona, led by Jean-Luc Brédas, and the University of California, led by Feng Wang, also contributed to the work.

Called “low-k” dielectrics, electrical insulation materials minimize electrical crosstalk in chips. By steering current to eliminate signal interference, low-k dielectrics are the silent hero that make all electronics possible. Ideally, this material type also could pull damaging, electrical current-generated heat away from the circuitry. But because low-k materials have very low thermal conductivity, they have been previously unable to manage heat.

“Scientists have been in search of a low-k dielectric material that can handle the heat transfer and space issues inherent at much smaller scales,” Hopkins said. “Although we’ve come a long way, new breakthroughs are just not going to happen unless we combine disciplines. For this project we’ve used research and principles from several fields – mechanical engineering, chemistry, materials science, electrical engineering — to solve a really tough problem that none of us could work out on our own.”

Using two-dimensional (2D) covalent organic frameworks (COFs), the cross-disciplinary team developed high-quality, porous COF thin films that finally solve the heat problem. Not only is the material low-k, it also has high thermal conductivity. The team is currently applying this new material class to meet the requirements of miniaturing transistors on a dense chip.

“We’re taking sheets of polymer that are only one atom thick — we call this 2D — and controlling their properties by layering the sheets in a specific architecture,” said Dichtel, the Robert L. Letsinger Professor of Chemistry in Northwestern’s Weinberg College of Arts and Sciences and a member of the Steering Committee of the International Institute for Nanotechnology. “Our study finds that COFs show both low-k properties and thermal conductivity as a consequence of their 2D layer architectures and porous structures.”

The study, “Thermally conductive ultra-low-k dielectric layers based on two-dimensional covalent organic frameworks,” was supported by the U.S. Army Research Office, the National Science Foundation, the Office of Naval Research and the U.S. Department of Energy.