Northwestern team among first to visualize polymers in actual material

The structure of polymers was first hypothesized around a century ago, but researchers had not directly seen what they look like in an actual material. 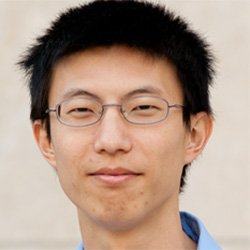 Recent work from Northwestern Engineering has changed that.

Led by IIN-affiliated researcher Muzhou Wang, a team of investigators are among the first to directly image individual polymers in a bulk polymer environment. To show the first clear images of single-polymer molecules in a solid material, the researchers used super-resolution optical microscopy, which can highlight individual molecules and provide contrast against a dark background.

This work uses a core technique from Wang’s research group. He said the method used is especially meaningful because these images were obtained using optical microscopy, which normally is not capable of imaging features below hundreds of nanometers in size. Super-resolution microscopy has historically been used mostly in the biological community, but Wang’s group is pioneering its adoption in polymer science. This work is a prominent example of this technique.

“Here, we used the model system of bottlebrush polymers, which consist of a long backbone densely grafted by side chains,” said Jonathan Chan, the paper’s lead author. “By changing features such as the number and length of side chains, we observed changes to the flexibility of these molecules. We saw that these chains behave differently in a bulk system compared to the previously studied environment of polymers in a solution.”

Wang and his team presented the findings in the paper “Direct Visualization of Bottlebrush Polymer Conformations in the Solid State” that was published October 5 in the journal Proceedings of the National Academy of Sciences of the United States of America.

Wang is an assistant professor of chemical and biological engineering. Chan is a graduate student in Wang’s lab.

Wang and his colleagues are next looking to explore more single-polymer phenomena in solid materials.

“Because of the non-invasive, non-destructive nature of super-resolution, we hope to use the techniques established in this work to study dynamics and see how individual polymer chains move in these systems,” Wang said.