Meet Qinghui Guo, a postdoctoral fellow in the Stoddart Group

Qinghui Guo is a postdoctoral fellow in the Stoddart Group, which harnesses molecular recognition and self-assembly processes in template-directed protocols for the synthesis of functionalized and mechanized molecules, prior to their being introduced into integrated nanosystems. 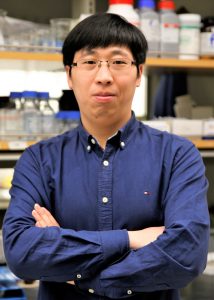 I was born and grew up in Henan Province, located in the central part of China.

I received my undergraduate degree in chemistry from Lanzhou University, and then completed my PhD at Tsinghua University in China.

In middle school, I found that I could easily understand what I was learning in chemistry and enjoyed explaining chemical principles to my friends. Since then I have been attracted by the beauty of chemistry, which can create new molecules and produce useful materials for humankind.

The theme of my research is uncovering the intrinsic nature of how molecules interact with one another involving of the principles of organic chemistry, supramolecular chemistry, and nanotechnology. With a full understanding of new principles, the final goal is the rational design and construction of functional and smart materials that can be used to improve quality of life.

For example, I have discovered a new model for directing the hierarchical assembly of positively charged, and hence repulsive, molecules in a solid state. By expanding this concept, we can prepare single crystals of materials which may be useful in applications such as the removal of radioactive contaminants in the environment and conduction of protons in nanopores.

Your research focuses on the design and synthesis of supramolecular self-assembled porous materials as well as functional macrocycles for molecular recognition and molecular machines. What attracted you to this area, and what do you hope to achieve with your research?

When I was an undergraduate student in Lanzhou, I took a class focused on supramolecular chemistry and the mechanical bond. Around that time, I realized that all the principles I had learned in this class were totally different from what I had known previously from studying more traditional chemistry. In supramolecular chemistry, molecules can organize themselves and form higher-order assemblies under the influence of noncovalent bonding. In the chemistry of the mechanical bond, two or more component parts become entangled to form molecules which cannot be separated without breaking or distorting the chemical bonds. These totally new and creative concepts interested me, so I decided to jump into this arena.

The goal of my research is developing smart materials and molecular machines on the nanoscale that can perform adaptive functions and do useful work under the influence of outside stimuli in different environments.

The highlight of my time at Northwestern was receiving the Ninth Annual Stoddart Group Award for Best Publication of the Year, which was a result of publishing my work on a “Nanoporous Supramolecular Diamond” in the journal Chem last year.

The most challenging part of my work is finding what Prof. Stoddart calls a “big problem” in science and tackling this big problem by devoting my intellect and expertise to solving it.

Prof. Sir Fraser Stoddart is an inspiring mentor, friend, and team leader. The most wonderful thing about the Stoddart Group is that I have the absolute freedom to explore my own ideas.  Meanwhile, Fraser encourages his group members to collaborate with colleagues inside and outside of the group. The great research environment in the Research Palace, created by Fraser, has been an inspiration for all my best projects.

On the weekends, I enjoy hiking with friends and being close to nature. Also, I like to go shopping and cook Chinese food.