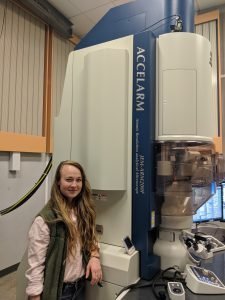 Where are you originally from?
I grew up in Southern California and went to UC Santa Barbara for my B.S. in Chemistry. I started my Ph.D. with Nathan [Gianneschi] at UC San Diego, then our group moved across the country to join Northwestern.

How did you first become interested in nanotechnology?
While I was at UCSB, I was on the triathlon team, which had a mix of undergrad and grad students. Several grad students were helpful and recommended that I get into research as early as I could, so I joined the Reich Biochemistry Lab at UCSB. Working in that lab was pivotal because Prof. Reich allowed me to do hands-on research on drug design and the controlled delivery of therapeutics using hollow gold nanoshells and near-infrared lasers. That piqued my interest, so I became involved, then decided I wanted to do something nano-related in grad school.

And did you know before you started in that lab that nanotechnology was a field you were interested in pursuing?
Not at all! As a freshman in college, I didn’t have a solid idea of what I was interested in yet. When I was looking for a lab to join, it was mostly for anyone who would help me out. The Reich Group brought me in, taught me how to do science, and helped my interests along.

So how would you explain what you do to someone who doesn’t know anything about nanotechnology?
It can be difficult based on the person’s background. Nanotechnology deals with things on the nanoscale, so I first need to get across how small that scale is – a good example is a human hair, with a diameter of about 100,000 nm. What I do is look at nanoscale materials at the highest possible resolution with the most powerful form of microscopy available – transmission electron microscopy, or TEM. In TEM, we shoot a beam of sub-atomic particles (in this case, electrons) at our specimen to get information about it. TEM is usually used to look at static, “dead” systems that have been dried out or fixated, which limits the amount and type of information we can gain. In my research, I use a relatively brand-new technique, Liquid Cell TEM, to directly observe nanomaterials moving around in liquids, interacting, and responding to their environment. The most straightforward way of learning how a thing does something is to watch it do the thing!

And what about on a functional level, or in terms of the application of your work?
The Gianneschi Group makes various types of nanomaterials, and the core component of our research is that the materials are dynamic. For instance, if you have a material that is light- or touch-sensitive, you can trigger a change in the material using that stimulus (such as the touch-me-not plant). We adjust that trigger using chemistry to elicit interesting responses. Using Liquid Cell TEM, I can directly observe these transformations occur in real time on the nanoscale. Through direct observation, we can better understand why a process occurs (for instance, fundamental biological questions) and perhaps discover something novel that can be used to fuel the development of synthetic materials.

How do you see your career developing over the next five or ten years?
I’d like to have a research position within industry, focused on materials development and characterization.

Have you had any powerful mentoring experiences while at Northwestern?
I was lucky in that when I joined the Gianneschi Group, I was paired up with a postdoc, Joe Patterson, who’s now a professor at UC Irvine. He taught me the most important techniques that I use in my research. The techniques themselves are complicated, so hands-on mentorship is necessary. We worked together for about a year before he moved on to his next position.

Now it’s my turn to pass on what I know. A couple fantastic grad students just started their PhDs in our group who are interested in Liquid Cell TEM. I’m going to try and help them get a running start so that this exciting work is carried on.

And what has been the best part about being in the Gianneschi Group?
Our group’s research is diverse. We work on TEM, but we’re also doing research on synthetic polymers, biomaterials, peptides, crystalline frameworks, melanin—there are a lot of different things going on. When you first start out as a graduate student, there are a bunch of different topics you can go after to find out what is interesting to you—for instance, I had no idea that I would be doing microscopy when I started grad school.

And then Nathan himself is wonderful—supportive and genuinely loves the science we do. So, if you go into his office to talk about issues with some experiment, he’ll give you good insight to make it progress, while also getting you excited about the science all over again.