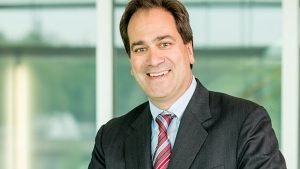 EVANSTON, Ill—.Northwestern University’s Chad A. Mirkin, a world-renowned chemist and nanoscience expert, will receive the 2019 Perkin Medal from The Society of Chemical Industry (SCI), America Group. The award is widely considered as “the highest honor in American industrial chemistry.”

Mirkin is the George B. Rathmann Professor of Chemistry in the Weinberg College of Arts & Sciences and the director of the International Institute for Nanotechnology (IIN)at Northwestern.

The 2019 Perkin Medal recognizes Mirkin’s contributions to nanotechnology and nanochemistry, and the many diagnostic, therapeutic and materials applications that have derived from his discoveries, including the invention and development of spherical nucleic acids (SNAs) and numerous nanopatterning methodologies.

“The work Chad has done in nanotechnology and supramolecular chemistry has resulted in innovative solutions that have a positive impact on people’s lives,” said Craig Rogerson, chair of SCI and chair, president and CEO of Hexion. “The SCI is pleased to reward Chad’s remarkable success in the industry, his contributions to science, and his commitment to developing diagnostic and therapeutic tools for the benefit of society.”

The Perkin Medal Selection Committee — consisting of the chairs or presidents of the American Chemical Society, the American Institute of Chemical Engineers, the Science History Institute, and the Society of Chemical Industry — noted Mirkin’s considerable contributions to chemistry, especially with regards to health care.

“Mirkin’s diagnostic inventions are used in half of the world’s top hospitals today, resulting in better doctoring, a better patient experience, a reduction in antibioticresistance and in lowering health care costs,” said Robert G. W. Anderson, president and CEO of the Science History Institute. “He exemplifies what the Perkin Medal stands for.”

Mirkin will receive the medal at a dinner in his honor on September 10, 2019 at the Hyatt at the Bellevue in Philadelphia.

“SCI has made significant contributions in promoting and inspiring achievement in the chemical industry,” said Mirkin. “I am honored and humbled to join the list of impressive Perkin Medal recipients.”

The annual Perkin Medal commemorates the discovery of the first synthetic dye (the so-called Perkin mauve) by Sir William Henry Perkin in 1856, a significant step forward in organic chemistry that led to a major segment of the chemical industry. The SCI Perkin Medal was first awarded to Perkin at a banquet held by the SCI in New York in 1906. Since then, more than 100 such awards have been given to notable scientists, including Edward Acheson, who discovered and manufactured carborundum; Carl Djerassi, who developed the first contraceptive pill; and Arthur D. Little and Milton Harris, who transformed the way research and whole enterprises were managed.

Richard B. Silverman, the Patrick G. Ryan/Aon Professor of Chemistry at Northwestern, who invented the drug pregabalin (Lyrica) to treat seizures and neuro-muscular pain, received the 2009 Perkin Medal.

Mirkin has authored more than 730 manuscripts and has submitted more than 1,100 patent applications worldwide (more than 310 issued). He founded seven companies. National Geographic recognized Mirkin’s invention of dip-pen nanolithography as one of the “top 100 scientific discoveries that changed the world.”

Mirkin has been recognized for his accomplishments with more than 130 national and international awards, including the inaugural NAS Sackler Prize in Convergence Research, the Linus Pauling Medal, the $500,000 Lemelson-MIT Prize and the iCON Innovator of the Year Award. He has served on the editorial advisory boards of more than 20 scholarly journals and is a current associate editor of the Journal of the American Chemical Society and the founding editor of the journal Small, one of the premier international nanotechnology journals. Mirkin has co-edited multiple best-selling books.