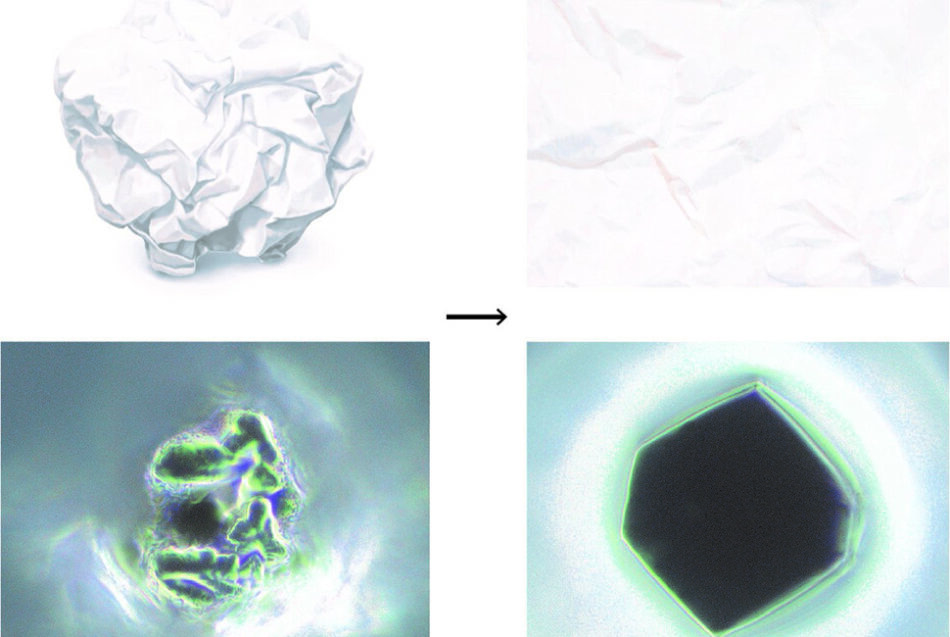 Remarkable new materials programmed from DNA can withstand deformations that would render most materials, including a sheet of paper, permanently and irreversibly damaged.

The team engineered colloidal crystals with complementary strands of DNA and found that dehydration crumpled the crystals, breaking down the DNA hydrogen bonds. But when researchers added water, the crystals bounced back to their original state within seconds.

The new study describes the shape memory that occurs after changes to a colloidal crystal’s structure and that is not accessible in other types of crystals. In response to external stimuli, reversible structural changes in these new materials could lead to associated dynamic functional changes that make them useful in chemical and biological sensing, optics and soft robotics.

“The deformed crystal has completely different properties when it’s broken down,” said Northwestern’s Chad A. Mirkin, who led the study. “But DNA retraces its steps. Imagine if a house was destroyed by a hurricane, but then that every nail and board returned to their original places to reform the house after the storm passed. That’s essentially equivalent to what is happening here with these crystals at the nanoscale.”

The new property, which is a type of “hyperelasticity coupled with shape memory,” is controlled by the particle-interconnecting DNA’s specific sequence and influences the object’s structure and compressibility. Because of the crystal’s plasticity, it can break down and then come back together.

The discovery builds on work that Mirkin began in 1996. At the time, his research group reported how DNA could be used as a sequence-encoded bonding material, a glue that can be used to build colloidal crystals — some of which have structures and properties akin to conventional crystals found in nature, while others have structures and properties that have never been found in nature.

In the manuscript, the authors describe a new way of making crystals much larger than have ever been made before — ones large enough that they can be observed with the naked eye. In addition to enabling the shape memory discovery, this development has allowed these researchers to uncover new ways to use crystals as force and chemical detectors. Mirkin said he’s excited to see how the shape memory property of these crystals will be used, for example, in flow sensors in microscale fluidic devices and in detectors for chemical and biological molecules. Mirkin also is considering ways to use the unique crystals to make materials capable of withstanding extraordinary damage and rebounding back to their original states.

“These are remarkable materials — even damage to skin, which has an innate and remarkable ability to regenerate, leaves scars,” Mirkin said. “In this case that doesn’t happen. The DNA code in these crystals guides them back to their original states. This ability could aid in controlling chemical reactions and creating new classes of light switches, where ‘on’ is the conventional crystal, and ‘off’ is the deformed one, triggered by tiny changes in flow and force.”

The paper was published today (Oct. 17) in the journal Nature.