Avoiding the crack of doom

EVANSTON, Ill.—Just as a journey of 1,000 miles begins with a single step, the deformations and fractures that cause catastrophic failure in materials begin with a few molecules torn out of place. This in turn leads to a cascade of damage at increasingly larger scales, culminating in total mechanical breakdown.

That process is of urgent interest to researchers studying how to build high-strength composite materials for critical components ranging from airplane wings and wind-turbine blades to artificial knee joints. 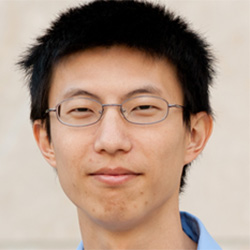 Northwestern Engineering’s Muzhou Wang worked with scientists from the National Institute of Standards and Technology (NIST) to devise a way to observe the effects of strain at the single-molecule level by measuring how an applied force changes the three-dimensional alignment of molecules in the material. The research was published in the journal Materials Horizons.

The technique uses single-molecule super-resolution optical microscopy, which can resolve objects in the range of 20 nanometers (billionths of a meter) – about one-tenth the size of what can be seen at the sharpest focus with a conventional optical microscope – to examine a polymer doped with fluorescent molecules that emit light of one wavelength when they are illuminated with light of another wavelength. An image of the emitted light reveals not only a molecule’s location, but also its orientation horizontally and vertically.

The super-resolution microscope, development of which won the 2014 Nobel Prize in Chemistry, has been widely employed for biomedical applications. “But we started wondering what you could do with it in the materials area,” said J. Alexander Liddle, chief of the microsystems and nanotechnology division at NIST. “That is, how can we see what is happening at the molecular level at the very earliest stages of deformation or damage? If those mechanisms can be understood, researchers may be able to design better materials that can inhibit failure.”

The researchers compared calculated images of single molecules in different orientations (left) with experimental ones (right) to determine the 3D alignment of the fluorescent molecules in a sample. 1 µm is one micrometer, about 1/100th the width of a human hair. Credit: NIST

Composite materials are used throughout industry to increase strength and decrease weight. For example, half the material by weight in a Boeing 787 airframe is carbon fiber-reinforced plastic and other composites.

The work opens up many avenues for future research. “This technique was a post-mortem study, in that we could view the damage in a material after it already happened,” said Wang, assistant professor of chemical and biological engineering at the McCormick School of Engineering and the paper’s first author. “The next step might be to learn how to perform this work in real time, to watch not only where the damage is happening, but when.”

The study builds on previously published work from Wang and his research group, in which they designed a fluorescent molecule that can be used to watch nanostructures develop in real time.

Prior to this experiment, the scientists used a mathematical model that predicted how light would look when emitted by molecules in different 3D alignments. When they illuminated the fluorescent molecules and made images of the emitted light, the results matched the model. After about 10,000 cycles of illumination, a telltale pattern emerged showing the extent of deformation.

“It’s sort of like a pointillist painting, where individual dots build up to form a shape,” Liddle said.

In addition to the technique’s clear relevance to the design of essential composite materials, there might also be applications in medicine.

The size and direction of the arrows show the average local alignment of individual fluorescent molecules as a result of the strain produced by a square punch driven into the material, and then pulled out at an angle towards the top of the image. Credit: NIST

“Let’s say you have a new bioimplant, for example, a knee replacement,” Wang said. “To make it biocompatible, it will likely be made of soft polymers, but you also want the device to have excellent mechanical properties. You want it to operate easily while also being stiff and tough. This technique could help inform design so the materials used have excellent mechanical strength.”

“The future for applying the latest super-resolution methods to understand materials properties is wide open,” said Christy Landes, professor of chemistry and electrical and computer engineering at Rice University, who was not involved in the research. “This work represents an important step as the group has combined orientational imaging and information theoretic analysis algorithms to map deformation in a polymer film. The next step, as they say, is to achieve process-level insight into defect formation.”

The team is also developing an improved imaging technique. It involves making two simultaneous image sets — one on each side of the doped polymer. On one side, imaging is produced by the method described above. On the other, a separate lens gathers fluorescent light from the material and divides it into four different polarizations in individual channels. Because the polarization of the emitted light is affected by the orientation of the fluorescent molecules, “if you measure the ratios of the intensity in each channel, you can figure out which direction the molecule is pointing,” Liddle said. “That would give us an independent measure of orientation.”

In addition, the scientists hope to improve resolution by a factor of about five — allowing them to image areas as small as a few nanometers. This could be accomplished by increasing the brightness of the fluorescent molecules, perhaps by reducing their exposure to oxygen, which shuts off fluorescence.

“It still amazes me that I can look at this little bright spot in a microscope and know within 5 or 10 nanometers where it is and also know, within a few degrees, in which direction it’s pointing,” Liddle said.

In addition to NIST scientists, researchers at the University of Maryland NanoCenter contributed to the experiment and journal article.

Read the full article at the McCormick School of Engineering website.