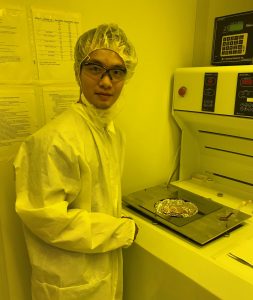 Where are you originally from?
I was born in Tianmen and grew up in Hubei, both of which are in the Hubei Province of China. I obtained my bachelor’s degree in materials science and engineering at the University of Illinois at Urbana-Champaign at 2013.

When did you first become interested in chemistry/nanoscience?
It is hard for me to identify the exact moment when I became interested in science. I wasn’t good at math and science before high school, and even had a hard time keeping up with my classmates in middle school. I selected mechanical engineering as my major at first as an undergrad but didn’t get enrolled and was temporarily moved to materials science and engineering. In my freshman and sophomore years, I took classes from a bunch of other departments including computer Science, physics, chemistry, and molecular cell biology to try to identify my real interest.

While I was taking quantum mechanics and organic chemistry in the same semester, I was amazed at how WebMO, a software based on quantum mechanics, enabled the accurate prediction of functional group reactivity. Since then, I’ve been interested in interdisciplinary research; I’ve found that materials science is a great platform for this because of the breadth of this field. I also noticed an increasing impact of computational methods on scientific research, so I pursued a minor in computer science and then continued to study materials science in graduate school, where I apply my computer science skills to solve nanoscience problems.

How do you explain what you study to people that don’t know anything about nanotechnology? Can you tell me about some potential applications for your work?
For my PhD degree, I developed a computational method to design ultrathin metasurfaces based on nanoscale metallic structures. By replacing the lens elements in cameras and microscope objectives with our metasurfaces, the thickness of the optical devices can potentially be reduced by more than a thousand times. These thin and light designs can be used in miniaturized cell phone cameras and compact endoscopes.

Can you tell me about your experiences either being mentored or mentoring others here at Northwestern?
The Odom group has an open mentorship policy, where new members are not assigned to specific mentors. Instead, new students are invited to interact with each senior member, figure out their area of expertise, and seek help based on the skills needed in their projects. Like many other first year members, I felt quite lost at the beginning because no one was going to just tell me what to do. But soon I started to appreciate this mentorship system, which stimulated my development as an independent researcher and was compatible with my goal of becoming a professor.

What’s the best part about being a student in the Odom group?
The Odom group is a unique environment where I received comprehensive training on all the skills required for an independent researcher including conceiving ideas, solving technical problems, and writing strong manuscripts. I am also always encouraged to pursue my own research ideas based on my computational skills. There have always been a lot of opportunities for valuable leadership experience!