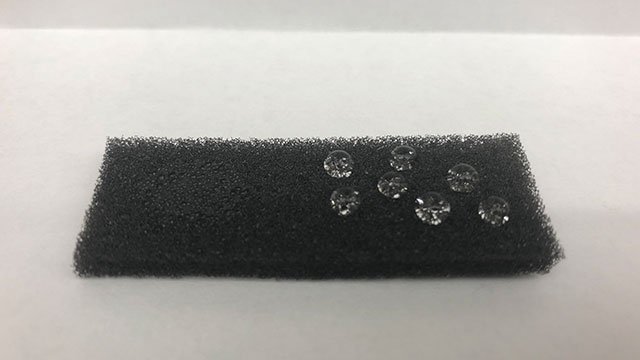 A Northwestern University-led team has developed a highly porous smart sponge that selectively soaks up oil in water.

With an ability to absorb more than 30 times its weight in oil, the sponge could be used to inexpensively and efficiently clean up oil spills without harming marine life. After squeezing the oil out of the sponge, it can be reused many dozens of times without losing its effectiveness.

“Oil spills have devastating and immediate effects on the environment, human health and economy,” said Northwestern’s Vinayak Dravid, who led the research. “Although many spills are small and may not make the evening news, they are still profoundly invasive to the ecosystem and surrounding community. Our sponge can remediate these spills in a more economic, efficient and eco-friendly manner than any of the current state-of-the-art solutions.”

The research was published May 27 in the journal Industrial Engineering and Chemical Research.

Dravid is the Abraham Harris Professor of Materials Science and Engineering at Northwestern’s McCormick School of Engineering. Vikas Nandwana, a senior research associate in Dravid’s laboratory, is the paper’s first author.

Oil spill clean-up is an expensive and complicated process that often harms marine life and further damages the environment. Currently used solutions include burning the oil, using chemical dispersants to breakdown oil into very small droplets, skimming oil floating on top of water and/or absorbing it with expensive, unrecyclable sorbents.

“Each approach has its own drawbacks and none are sustainable solutions,” Nandwana said. “Burning increases carbon emissions and dispersants are terribly harmful for marine wildlife. Skimmers don’t work in rough waters or with thin layers of oil. And sorbents are not only expensive, but they generate a huge amount of physical waste — similar to the diaper landfill issue.”

The Northwestern solution bypasses these challenges by selectively absorbing oil and leaving clean water and unaffected marine life behind. The secret lies in a nanocomposite coating of magnetic nanostructures and a carbon-based substrate that is oleophilic (attracts oil), hydrophobic (resists water) and magnetic. The nanocomposite’s nanoporous 3D structure selectively interacts with and binds to the oil molecules, capturing and storing the oil until it is squeezed out. The magnetic nanostructures give the smart sponge two additional functionalities: controlled movement in the presence of an external magnetic field and desorption of adsorbed components, such as oil, in a simulated and remote manner.

The OHM (oleophilic hydrophobic magnetic) nanocomposite slurry can be used to coat any cheap, commercially available sponge. The researchers applied a thin coating of the slurry to the sponge, squeezed out the excess and let it dry. The sponge is quickly and easily converted into a smart sponge (or “OHM sponge”) with a selective affinity for oil.

Vinayak and his team tested the OHM sponge with many different types of crude oils of varying density and viscosity. The OHM sponge consistently absorbed up to 30 times its weight in oil, leaving the water behind. To mimic natural waves, researchers put the OHM sponge on a shaker submerged in water. Even after vigorous shaking, the sponge release less than 1% of its absorbed oil back into the water.

“Our sponge works effectively in diverse and extreme aquatic conditions that have different pH and salinity levels,” Dravid said. “We believe we can address a giga-ton problem with a nanoscale solution.”

“We are excited to introduce such smart sponges as an environmental remediation platform for selectively removing and recovering pollutants present in water, soil and air, such as excess nutrients, heavy metal contaminants, VOC/toxins and others,” Nandwana said. “The nanostructure coating can be tailored to selectively adsorb (and later desorb) these pollutants.”

The team also is working on another grade of OHM sponge that can selectively absorb (and later recover) excess dissolved nutrients, such as phosphates, from fertilizer runoff and agricultural pollution. Stephanie Ribet, a Ph.D. candidate in Dravid’s lab and paper coauthor is pursuing this topic. The team plans to develop and commercialize OHM technology for environmental clean-up.

The research, “OHM Sponge: A versatile, efficient and eco-friendly environmental remediation platform,” was supported by the National Science Foundation. Stephanie Ribet, Roberto Reis, Yuyao Kuang and Yash More — all from Northwestern — coauthored the paper. Dravid is director of global initiatives for Northwestern’s International Institute for Nanotechnology, where he also is a member of the steering committee.

Editor’s note: Dravid, Nandwana and Northwestern will have financial interests (equities, royalties) if the technology is commercialized.