EVANSTON, Ill.—Sir Fraser Stoddart, Northwestern professor of chemistry and a 2016 Nobel laureate, has been named a fellow of the American Chemical Society. Professor Stoddart, along with 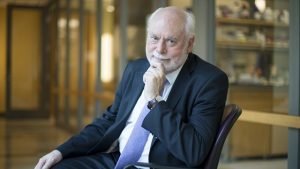 The new fellows (70, total) will be feted at the society’s fall national meeting in San Diego in August.

The fellows program began in 2008 as a way to recognize and honor ACS members for outstanding achievements in and contributions to science, the profession, and ACS.