An artistic rendition of an iVAX vaccine being prepared in the field. Credit: Justin Muir

More than 50% of all vaccines are wasted due to errors in transportation or storage, according to the World Health Organization. A research team led by Northwestern and Cornell universities has developed a new manufacturing platform that can quickly make vaccines at the point of care, ensuring they will not go to waste and expanding access to potentially life-saving medications.

The new method uses cell-free components that are freeze-dried, remaining shelf-stable for six months or longer. Once the cell-free systems reach their destination and are ready for use, health care workers can rehydrate them with a single drop of water to make the vaccine on demand.

To demonstrate proof-of-principle, the researchers used the platform to make conjugate vaccines to protect against bacterial infections. They were able to produce a single dose in one hour, costing about $5 per dose. The researchers immunized mice and exposed them to Francisella tularensis, a pathogenic bacteria that is deadly without treatment. All vaccinated mice survived.

The research was published Feb. 3 on the cover of the journal Science Advances. 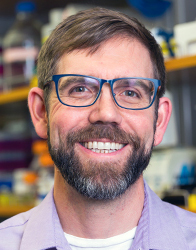 “We’re developing this method to make medicines on-demand for bacterial infections, but we could extend the platform to other medicines, including viral vaccines or insulin,” said Northwestern’s Michael Jewett, who co-led the study. “Our cell-free approach, which alleviates cold-chain requirements, will provide a way to rapidly respond to pathogen outbreaks and emerging threats in the future.”

By eliminating the need for complicated supply chains and extreme refrigeration, the platform also will be powerful for low-resource settings, which often do not have access to expensive facilities and refrigerated storage.

“We tend to make medicines in large-scale facilities that can cost hundreds of millions of dollars or more,” Jewett said. “We also have to rely on refrigerated supply chains. These issues limit the overall access to medicines. We need to rethink making and delivering medicines.”

Jewett is a professor of chemical and biological engineering at Northwestern’s McCormick School of Engineering and director of Northwestern’s Center for Synthetic Biology, and a member of the Steering Committee of the International Institute for Nanotechnology. He co-led the work with Matthew DeLisa, the William L. Lewis Professor at Cornell’s Robert Frederick Smith School of Chemical and Biomolecular Engineering and the director of the Cornell Institute of Biotechnology.

The secret behind the new manufacturing platform — called in vitro conjugate vaccine expression (iVAX) — is cell-free synthetic biology. To make a cell-free system, researchers remove a cell wall and collect the cell’s molecular machinery. They then put this machinery into a test tube and freeze-dry it. Adding water sets off a chemical reaction that activates the cell-free system, turning it into a catalyst for making a usable medicine.

“It’s like taking an engine out of a car and repurposing that engine,” Jewett said. “Or adding water to activate dried yeast when making bread. Similarly, we are freeze-drying the cell’s core catalysts.”

In the study, the researchers used molecular machinery from Escherichia coli to develop a conjugate vaccine to protect against bacterial infections. Conjugate vaccines attach a sugar — that is unique to a pathogen — to a carrier protein that stimulates the immune system. The sugar is like a fingerprint of the pathogen. By learning to recognize that protein as a foreign substance, your body knows how to mount an immune response to attack it when encountered again.

Unfortunately, conjugate vaccines are difficult and expensive to manufacture, requiring a complex, multistep process to isolate the sugar and attach it to the carrier protein, which must be produced separately.

“The technology we created sidesteps a lot of these issues,” DeLisa said. “We’re basically taking a multistep process and compressing it down into a single reaction step, where the sugar and carrier protein are made at the same time and then conjugated together in a single pot.”

As a model vaccine target, the researchers focused on the highly virulent Francisella tularensis, which the Centers for Disease Control and Prevention categorizes as a class A bioterrorism agent due to its high fatality rate. The researchers took a sugar from the deadly bacteria and put it into the cell-free system. The cell-free system then produced the conjugate vaccine carrier protein, coupled to the sugar.

“We have basically given these carrier proteins the fingerprint of the bacteria,” Jewett said, “so your body can recognize it.”

Although viruses like the novel coronavirus are top of mind, Jewett and his team are focused on conjugate vaccines as a response to the emerging threat of antibiotic resistant bacteria.

“The rise of antibiotic resistant microbes is something that the entire planet will need to address in the coming years,” Jewett said. “Antibiotic resistance is growing. It’s a slow-moving pandemic.”