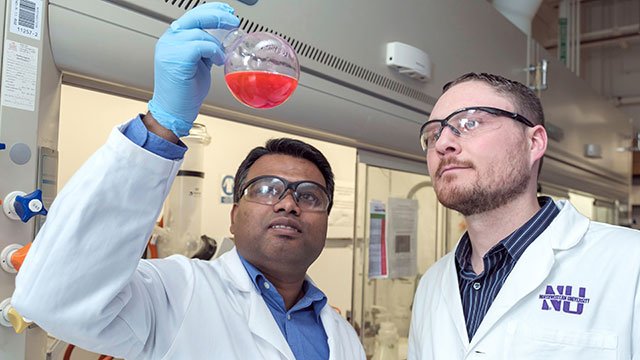 Spike proteins — the crown of bulbous projections that give the coronavirus its signature halo effect — attach to and infect healthy cells, causing COVID-19. Led by Northwestern University and Massachusetts Institute of Technology (MIT), the research team is engineering new therapies that could potentially disable the virus and prevent its infection of human cells

The idea is based on a recent discovery from the laboratory of Bradley L. Pentelute, an associate professor of chemistry at MIT. Pentelute’s team discovered a peptide molecule that specifically and strongly binds to the coronavirus’ spike protein.

However, peptide drugs — which could revolutionize treatments for many diseases — are notoriously challenging because enzymes in our bodies rapidly degrade them, so they lose efficacy. This is precisely where investigators at Northwestern’s Simpson Querrey Institute (SQI) can help.

“I read about Professor Pentelute’s peptide in an MIT news item two weeks ago and reached out to him the same evening,” said Northwestern’s Samuel I. Stupp, who leads the Northwestern effort. “A few days later, a package arrived at SQI with a large enough quantity of the binding peptide to initiate the joint project.”

Researchers in Stupp’s laboratory and SQI’s Peptide Synthesis Core Facility directed by Northwestern’s Mark Karver have been working over the past two years on a platform to deliver peptide drugs. Stupp, an expert on self-assembly of peptides, initiated this project with chemistry graduate student Ruomeng Qiu, which involves “gluing” millions of peptides into a nanostructure that becomes the carrier of the precious drugs. The similar chemistry of the drug and the carrier allows the scientists to design nanostructures that protect the peptide drug while it circulates in the body before it encounters the culprit of the disease, the novel coronavirus.

SQI’s peptide nanostructures have already been proven to be highly effective in regenerative medicine, and the Institute is working hard to get the technology to clinical trials. The efficacy of the SQI carriers in some regenerative medicine targets is also based on the protection of fragile proteins needed to signal cells, and this same phenomenon could be instrumental in the development of antiviral vaccines. The Pentelute lab at MIT, on the other hand, specializes in the rapid synthesis of peptides, which is extremely important for the clinical translation of all peptide-based therapies.

The SQI carrier nanostructures have water-filled channels, which could hold the antiviral therapies and protect them from destructive enzymes. The SQI team has been investigating the concept using a potential Alzheimer’s disease drug and the general approach has been found to be highly effective in in vitro experiments.

Now Stupp, Karver, Qiu and SQI assistant core scientist Suvendu Biswas have quickly turned their attention to COVID-19 by working with the MIT team and possibly their collaborators at the Icahn School of Medicine at Mount Sinai in New York, who could test the constructs in human cells and animal models.

“It has been great to see how graduate students and postdocs are volunteering to contribute physically or virtually to the rapid progress of the project,” Stupp said. “We are very excited about this joint effort with the MIT team given the importance of peptides and peptide nanostructures in the development of new therapies and vaccines.”