Van Duyne’s discovery of SERS — which is capable of both detecting and identifying single molecules — has had a huge effect on chemistry, physics, materials science and medicine around the world. He discovered the technique in 1977, six years after joining the faculty at Northwestern, where he spent the entirety of his career as a professor and researcher.

“Professor Van Duyne contributed immeasurably to his discipline, to his department and to Northwestern,” said Adrian Randolph, dean of Northwestern’s Weinberg College of Arts and Sciences. “He was a brilliant and amicable colleague, one whose research and 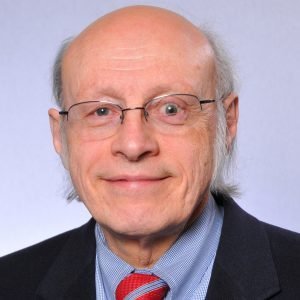 Van Duyne was the Charles E. and Emma H. Morrison Professor of Chemistry at Weinberg College and a professor of biomedical engineering at the University’s McCormick School of Engineering. He also was a key member of Northwestern’s International Institute for Nanotechnology (IIN), where he played an important role in both the Nanoscale Science & Engineering Center and Center of Cancer Nanotechnology Excellence.

Van Duyne was a trailblazer in the field of plasmonics — the study of how light interacts with metal surfaces that support surface plasmons. In addition to his discovery of SERS, Van Duyne was also known for his advancement of nanosphere lithography (NSL), which helped transform the field of nanoparticle optics, and of localized surface plasmon resonance spectroscopy.

“Rick not only contributed to fundamental experimental and theoretical breakthroughs, but he also has leveraged his science for applications, including art conservation and preservation through the development of nondestructive ways to detect pigments and colorants in major works of art,” said Brian Hoffman, a professor of chemistry at Northwestern.

“Few scientists can match the breadth of his impact,” added Teri Odom, chair of the Department of Chemistry and the Charles E. and Emma H. Morrison Professor of Chemistry.

Van Duyne was a fellow of the American Institute for Medical and Biological Engineering as well as a member of numerous distinguished societies, including the Society of Applied Spectroscopy, the Royal Society of Chemistry, the American Physical Society and the American Association for the Advancement of Science.

He earned a bachelor of science degree from Rensselaer Polytechnic Institute in 1967 and a Ph.D. in analytical chemistry from the University of North Carolina in 1971. He joined the Northwestern faculty later that year as an assistant professor, and was promoted to associate professor in 1976 and then to full professor in 1979.

“Rick’s living legacy of group members, placed as faculty at some of the most prestigious universities and in major positions of influence throughout the chemical industries, will continue to enrich our lives,” Odom said.

Van Duyne was known for inspiring future scientists as well. An Eagle Scout, he played a key role in the creation and success of the IIN’s annual “All Scout Nano Day,” which has encouraged more than 1,600 Boy Scouts, Girl Scouts and Venturing Crew members to pursue higher education and careers in science.

“Rick was not only an accomplished, inspirational scientist, but also an exceptionally generous and thoughtful human being,” IIN Director Chad A. Mirkin said. “He was a trusted and deeply valued colleague and friend throughout the university. He will be greatly missed.”

Services for Professor Richard P. Van Duyne will take place Sunday, Aug. 4 from 2 p.m. to 5 p.m. at Donnellan Family Funeral Services, 10045 Skokie Blvd., in Skokie, Ill. The memorial service will begin at 3 p.m. Donations in Richard P. Van Duyne’s memory can be made to the American Lung Association.