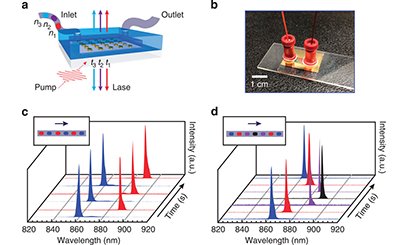 Northwestern University scientists have developed the first liquid nanoscale laser. And it’s tunable in real time, meaning you can quickly and simply produce different colors, a unique and useful feature. The laser technology could lead to practical applications, such as a new form of a “lab on a chip” for medical diagnostics.

To understand the concept, imagine a laser pointer whose color can be changed simply by changing the liquid inside it, instead of needing a different laser pointer for every desired color.

In addition to changing color in real time, the liquid nanolaser has additional advantages over other nanolasers: it is simple to make, inexpensive to produce and operates at room temperature.

Nanoscopic lasers — first demonstrated in 2009 — are only found in research labs today. They are, however, of great interest for advances in technology and for military applications.

“Our study allows us to think about new laser designs and what could be possible if they could actually be made,” said Teri W. Odom, who led the research. “My lab likes to go after new materials, new structures and new ways of putting them together to achieve things not yet imagined. We believe this work represents a conceptual and practical engineering advance for on-demand, reversible control of light from nanoscopic sources.”

Odom is Board of Lady Managers of the Columbian Exposition Professor of Chemistry in the Weinberg College of Arts and Sciences.

The findings were published this week by the journal Nature Communications.

The liquid nanolaser in this study is not a laser pointer but a laser device on a chip, Odom explained. The laser’s color can be changed in real time when the liquid dye in the microfluidic channel above the laser’s cavity is changed.

The laser’s cavity is made up of an array of reflective gold nanoparticles, where the light is concentrated around each nanoparticle and then amplified. (In contrast to conventional laser cavities, no mirrors are required for the light to bounce back and forth.) Notably, as the laser color is tuned, the nanoparticle cavity stays fixed and does not change; only the liquid gain around the nanoparticles changes.

The main advantages of very small lasers are:

• They can be used as on-chip light sources for optoelectronic integrated circuits;

• They can be used in optical data storage and lithography;

• They can operate reliably at one wavelength; and

• They should be able to operate much faster than conventional lasers because they are made from metals.

Plasmon lasers are promising nanoscale coherent sources of optical fields because they support ultra-small sizes and show ultra-fast dynamics. Although plasmon lasers have been demonstrated at different spectral ranges, from the ultraviolet to near-infrared, a systematic approach to manipulate the lasing emission wavelength in real time has not been possible.

The main limitation is that only solid gain materials have been used in previous work on plasmon nanolasers; hence, fixed wavelengths were shown because solid materials cannot easily be modified. Odom’s research team has found a way to integrate liquid gain materials with gold nanoparticle arrays to achieve nanoscale plasmon lasing that can be tuned dynamical, reversibly and in real time.

The use of liquid gain materials has two significant benefits:

• The organic dye molecules can be readily dissolved in solvents with different refractive indices. Thus, the dielectric environment around the nanoparticle arrays can be tuned, which also tunes the lasing wavelength.

• The liquid form of gain materials enables the fluid to be manipulated within a microfluidic channel. Thus, dynamic tuning of the lasing emission is possible simply by flowing liquid with different refractive indices. Moreover, as an added benefit of the liquid environment, the lasing-on-chip devices can show long-term stability because the gain molecules can be constantly refreshed.

These nanoscale lasers can be mass-produced with emission wavelengths over the entire gain bandwidth of the dye. Thus, the same fixed nanocavity structure (the same gold nanoparticle array) can exhibit lasing wavelengths that can be tuned over 50 nanometers, from 860 to 910 nanometers, simply by changing the solvent the dye is dissolved in.