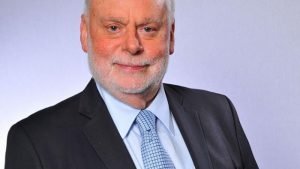 EVANSTON – Sir Fraser Stoddart, Board of Trustees Professor of Chemistry in the Weinberg College of Arts and Sciences at Northwestern University, today (Oct. 5) was awarded the Nobel Prize in Chemistry.

The Royal Swedish Academy of Sciences announced it has awarded the Nobel Prize in Chemistry 2016 to Professor Stoddart as well as Jean-Pierre Sauvage, University of Strasbourg, France, and Bernard L. Feringa , University of Groningen, the Netherlands, “for the design and synthesis of molecular machines.” The academy credited them with developing“molecules with controllable movements, which can perform a task when energy is added.”

“The development of computing demonstrates how the miniaturization of technology can lead to a revolution. The 2016 Nobel Laureates in Chemistry have miniaturized machines and taken chemistry to a new dimension,” the academy said. Read the academy’s announcement.

For his part, Professor Stoddart was awarded the prize because, the academy said, in 1991 he developed “a rotaxane. He threaded a molecular ring onto a thin molecular axle and demonstrated that the ring was able to move along the axle. Among his developments based on rotaxanes are a molecular lift, a molecular muscle and a molecule-based computer chip.”

“The development of computing demonstrates how the miniaturization of technology can lead to a revolution. The 2016 Nobel Laureates in Chemistry have miniaturized machines and taken chemistry to a new dimension.”

By introducing an additional type of bond (the mechanical bond) into chemical compounds, Stoddart became one of the few chemists to have opened up a new field of chemistry during the past 25 years. His work on molecular recognition and self-assembly and his subsequent introduction of template-directed routes to mechanically interlocked molecules has changed dramatically the way chemists go about making soft materials.

Stoddart’s introduction of the mechanical bond, which has led to the fabrication of artificial molecular switches and motors, has been responsible for putting chemists at the forefront of the burgeoning field of molecular nanotechnology, with implications ranging all the way from information technology to health care.

“This is a tremendous honor for Professor Stoddart and Northwestern University,” Northwestern President Morton Schapiro said. “Fraser is a pioneer in the fields of chemistry and integrated nanosystems and a member of an outstanding chemistry department. The University is proud of his many accomplishments.”

Stoddart’s achievements include raising the bar for molecular electronics (using molecules on the nanoscale as the tiniest of switches, which have been incorporated into the densest of memory chips in a device that can hold the Declaration of Independence but is only the size of a white blood cell) and giving practical expression to artificial molecular switches (using nanovalves planted on the surfaces of mesoporous glass nanoparticles to create controllable and targeted drug delivery systems for the treatment of cancer and other degenerative diseases).

In 2007, The Sunday Times in the U.K. wrote that Stoddart “is to nanotechnology what J.K. Rowling is to children’s literature.”

A common theme of Stoddart’s research is the quest for a better fundamental understanding of self-assembly and molecular recognition processes in chemical systems. He has been working for more than three decades on using this growing understanding to develop template-directed protocols that rely upon such processes to create artificial molecular machines. Underlying his bottom-up approach to the construction of integrated nanosystems is Stoddart’s philosophy of transferring concepts from biology into chemistry.

“My research on mechanically interlocked molecules, which has taken the field of supramolecular chemistry, i.e., chemistry beyond the molecule, back into the molecular domain, heralds a game-changer for molecular nanotechnology,” Stoddart said.

The exquisite interplay between the classical (covalent and noncovalent) chemical bonds and the contemporary mechanical bond provides chemists with a blueprint and platform to start designing and making artificial molecular motors that operate far away from equilibrium in much the same way as do the motor-proteins that drive living systems to perform work in a multitude of different settings.

A native of Edinburgh, Scotland, Stoddart received the Royal Medal in 2010 from His Royal Highness the Duke of Edinburgh at the Royal Society of Edinburgh (RSE), Scotland’s national academy of arts and sciences. He was appointed by Her Majesty Queen Elizabeth II as a Knight Bachelor in her 2007 New Year’s Honours List for his services to chemistry and molecular nanotechnology. He was elected to the fellowship of the American Academy of Arts and Sciences in 2012 and membership of the National Academy of Sciences in 2014.

During his career, Stoddart has received many other prestigious national and international awards and honors. They include being elected an honorary fellow of both the RSE and the Royal Society of Chemistry (RSC) and receiving the Davy Medal from the Royal Society, the national academy of science of the United Kingdom and the Commonwealth, of which he is also a Fellow. Other awards include the Nagoya Gold Medal in Organic Chemistry, the American Chemical Society’s Arthur C. Cope Award, the Feynman Prize in Nanotechnology, the King Faisal International Prize in Science, the Tetrahedron Prize for Creativity in Organic Chemistry, the Albert Einstein World Award of Science and the RSC’s Centenary Prize.

Stoddart serves on the international advisory boards of numerous journals, including Chemistry World, Organic Letters and ChemPlusChem. He has published 1,080 scientific papers and trained more than 500 graduate and postdoctoral students.

Before joining the Northwestern faculty in January 2008, Stoddart was Fred Kavli Chair in Nanosystems Sciences at the University of California at Los Angeles and director of the California NanoSystems Institute. He came to UCLA in 1997 from England’s University of Birmingham, where he had been a professor of organic chemistry since 1990 and had headed the university’s School of Chemistry since 1993.

In 1967, he moved to Queen’s University in Ontario, Canada, where he was a National Research Council postdoctoral fellow and then, in 1970, to England’s University of Sheffield, where he was first an Imperial Chemical Industries (ICI) research fellow before becoming a faculty lecturer (assistant professor) in chemistry. After spending a three-year “secondment” (1978 to 1981) at the ICI Corporate Laboratory in Runcorn, England, he returned full time to the University of Sheffield, where he was promoted to a readership (associate professorship). He moved to the University of Birmingham in 1990 to take up the Chair of Organic Chemistry in 1990.

This is the second Nobel Prize winner from Northwestern’s department of chemistry. The late John A. Pople received the 1998 Nobel Prize in Chemistry.

VIDEO: Watch Fraser Stoddart speak at a nanotechnology town hall meeting about his background, his research and his “15 seconds worth of contact” with Her Majesty Queen Elizabeth II.