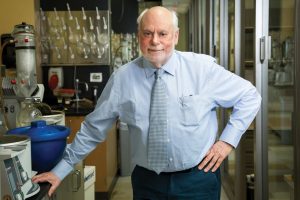 When Fraser Stoddart’s team of Northwestern University chemists made a discovery that inspired his company, PanaceaNano, the Nobel Prize winner never dreamed its first commercial use would be anti-aging skin care.

“You could have knocked me over with a feather when CEO Youssry Botros said, ‘What we’re going to start with, Fraser, are cosmetics,’ ” says Stoddart, 76.

But the company’s co-founder and chief technology officer quickly realized it was a perfect fit—for both scientific and business reasons.

Stoddart’s porous, sugar-based material was used to develop and patent the organic nanocubes, or ONCs, in PanaceaNano’s skin care line, called Noble. The technology is groundbreaking because ONCs can be loaded with active ingredients and are engineered to release those ingredients at a precise rate over time. While other anti-aging products absorb into the skin quickly, PanaceaNano’s products keep releasing agents with molecular precision up to 10 times longer. So a little goes a long way—for fine lines, and for bottom lines. “For very little of the organic nanocubes, we would have a product that people will pay hundreds of dollars for,” Stoddart explains. PanaceaNano won a Chicago Innovation Award in 2018.