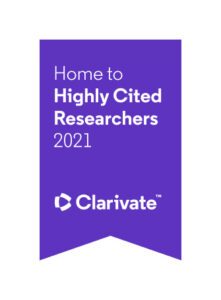 Nineteen researchers affiliated with the International Institute for Nanotechnology have been named to the annual Highly Cited Researchers™ 2021 list from Clarivate, representing interdisciplinary excellence in chemistry, medicine, engineering, materials science, physics and other fields.

This highly anticipated annual list identifies researchers who demonstrated significant influence in their chosen field or fields through the publication of multiple highly cited papers during the last decade. Their names are drawn from the publications that rank in the top 1% by citations for field and publication year in the Web of Science™ citation index.

The methodology that determines the “who’s who” of influential researchers draws on the data and analysis performed by bibliometric experts and data scientists at the Institute for Scientific Information™ at Clarivate. It also uses the tallies to identify the countries and research institutions where these elite researchers are based.

Stoddart, Mirkin, and Mark are among the 376 Citation Laureates™ recognized by Clarivate, through citation analysis, as world-class researchers since 2002. Out of this number, 59 have gone on to receive the Nobel Prize.

Northwestern is listed as the secondary institution for Jiaxing Huang and Jeffrey Sosman.