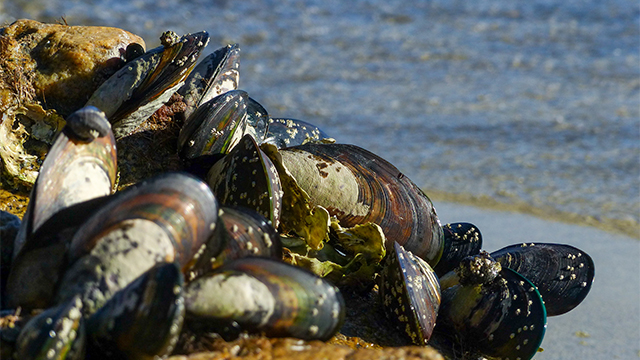 Researchers use nature’s strongest secrets to build even stronger biomaterials

Those who have tried to pry a mussel from anything from wood to rock know how stubborn the underwater mollusks are — and their gluey secret has long captivated scientists. For years, researchers have attempted to replicate the extraordinary adhesive and its properties in the lab, targeting some of the eight proteins that mussels secrete and use to coat an organ called a foot that mussels use to attach to surfaces.

Now, using a novel method to arrange molecules, researchers at Northwestern University have created a material that performs even better than the glue they were trying to mimic. Their findings, published March 3 in the Journal of the American Chemical Society, expand on how these protein-like polymers can be used as a platform to create new materials and therapeutics.

“The polymer could be used as an adhesive in a biomedical context, which means now you could stick it to a specific tissue in the body,” said Northwestern’s Nathan Gianneschi. “And keep other molecules nearby in one place, which would be useful in wound healing or repair.”

Gianneschi led the study and is the Jacob and Rosaline Cohn Professor of Chemistry in the Weinberg College of Arts and Sciences at Northwestern.

Proteins like those secreted by mussel feet exist around nature. Evolution has made a habit of creating these long, linear chains of amino acids that repeat over and over (called tandem repeat proteins, or TRPs). Appearing at times stretchy, strong and sticky, the protein frameworks show up in insect wings and legs, spider silk and mussel feet. Scientists know the exact primary sequences of amino acids that make up many such proteins, yet have trouble replicating the complicated natural process while still maintaining the extraordinary qualities.

The paper’s first author Or Berger, a postdoctoral researcher in Gianneschi’s lab who studies peptides — these very chains of amino acids — came with an idea for how to arrange amino acid building blocks differently to replicate the properties rather than directly copy the structure of mussel proteins.

By taking the building block of one of the proteins (the repeat decapeptide, a 10-amino acid sequence that makes up the mussel foot protein), and plugging it into synthetic polymer, Berger thought the properties may be enhanced.

As associate director of the International Institute for Nanotechnology, Gianneschi has built much of his lab around the idea of mimicking proteins in function by using polymer chemistry. Within precision therapeutics, drug therapies like antibodies and other small molecules combat some diseases, where a nanocarrier is used to deliver a drug to a target more effectively. But Gianneschi says replicating proteins could approach biological problems differently, by changing interactions inside and between cells that are involved in the progression of disease, or between cells, tissues and materials.

“Proteins arrange amino acids as chains, but instead we took them and arranged them in parallel, on a dense synthetic polymer backbone,” Gianneschi said. “This was the same thing we have begun to do for controlling specific biological interactions, so the same platform technology we will use for future therapeutics has really become potentially interesting in materials science.”

The result was something that looks like a brush of peptides rather than looping together amino acids in a straight line as a chain. While the novel process may seem like adding an additional step, forming protein-like polymers (PLPs) skips several steps, requiring researchers to form peptides in a readily available synthesizer and insert them into the tightly packed backbone rather than going through tedious steps of protein expression.

To test the new material’s efficacy, the researchers applied either the polymer material or the native mussel protein to glass plates. The researchers placed cells on the plates and then, after washing them, assessed how many cells were present, either attached or not, to gauge how well the materials performed. They found the PLP formed a cellular superglue, leaving the most cells attached compared to the native mixture and untreated plate.

“We actually didn’t mean to improve on the mussel’s properties,” Berger said. “We only meant to mimic it, but when we went and tested it in several different assays, we actually got better properties than the native material in these settings.”

The team hopes the model can be widely applicable across other proteins that repeat their sequence to gain function in a new way to replicate proteins. They hypothesize such a platform could perform better than their native counterparts because they are denser and scalable. Gianneschi said this is the first of many papers to discuss polymer-based protein mimics, and he is already thinking about applications for future materials.

Resilin, for example, a stretchy protein found in insect legs and wings, could be used to make flexible drones and other robotics.

“When you talk about polymers, some people immediately think of plastic bags and bottles,” said Gianneschi said. “Instead, these are very functional, advanced precision materials, made accessible.”

Gianneschi and Berger are inventors on pending intellectual property in this space. Gianneschi also is a professor of biomedical engineering and materials science and engineering in the McCormick School of Engineering and a member of the Chemistry of Life Processes Institute, Simpson Querrey Institute and Robert H. Lurie Comprehensive Cancer Center of Northwestern University. He is the co-founder of a company, Grove Biopharma, that seeks to develop versions of these materials as translational therapeutics.

The study, “A Mussel Adhesive-Inspired Protemimetic Polymer,” was led by an all-Northwestern team with help from the labs of chemical and biological engineering professors Muzhou Wang and Danielle Tullman-Ercek. The research was supported by the National Science Foundation’s Division of Materials Research (Award number 2004899).