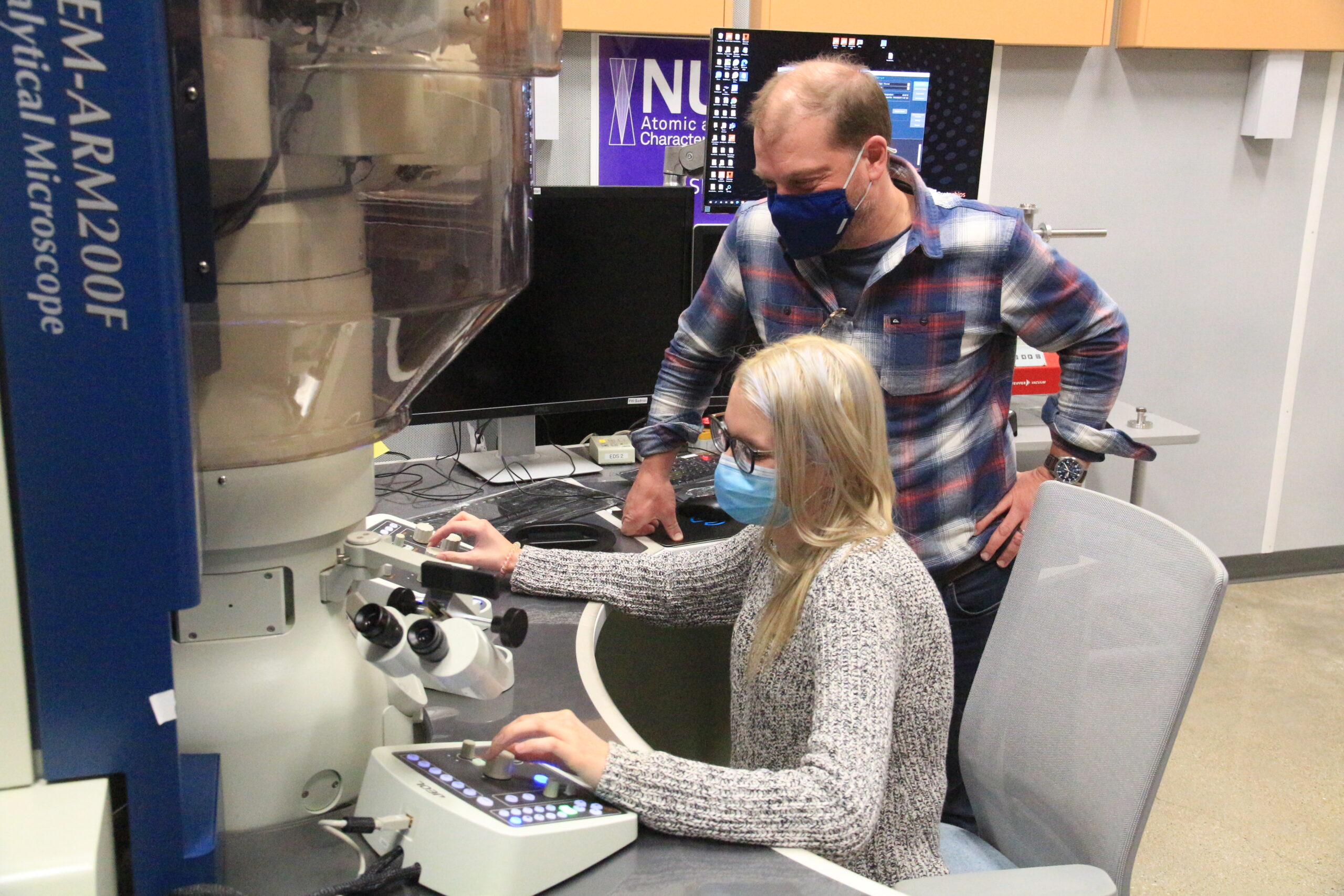 Joanna Korpanty and Nathan Gianneschi with an electron microscope.

With highly specialized instruments, we can see materials on the nanoscale – but we can’t see what many of them do. That limits researchers’ ability to develop new therapeutics and new technologies that take advantage of their unusual properties.

Now, a new method developed by researchers at Northwestern University is using Monte Carlo simulations to extend the capabilities of transmission electron microscopy and answer fundamental questions in polymer science.

“This has been an unmet need in chemistry and materials science,” said Northwestern’s Nathan C. Gianneschi, who led the research. “We can now look at nanomaterials in organic solvents and watch these dynamic systems self-assemble, transform and respond to stimuli. Our findings will provide a valuable guide for researchers in microscopy.”

Gianneschi is the Jacob and Rosaline Cohn Professor of Chemistry in Northwestern’s Weinberg College of Arts and Sciences and associate director of the International Institute for Nanotechnology. Joanna Korpanty, a graduate student in Gianneschi’s laboratory, is the paper’s first author.

Transmission electron microscopy (TEM) allows researchers to see materials at the nanoscale, which is smaller than the wavelength of visible light. The microscope fires a beam of electrons at a specimen, which is held in a vacuum; by studying how the electrons scatter off the specimen, an image can be developed.

This foundational imaging technique has limitations, though. Drying out a specimen for use in the vacuum of TEM will distort its appearance, and can’t be used for specimens that exist in a liquid solution or organic solvent. Cryogenic-TEM allows researchers to examine specimens that have been frozen in a solution, but it doesn’t allow researchers to watch the specimens respond to heat, chemicals and other stimuli.

That’s a major problem for the study of radiation-sensitive soft nanomaterials, which are enormously promising for applications such as “smart” drug delivery systems, catalysis, and ultra-thin films. In order to harness their potential, scientists need to see how these nanomaterials behave under different conditions – but conventional TEM and cryo-TEM can only show the dried-out or frozen aftereffects.

Liquid-cell TEM (LCTEM) is an attempt to solve that. Northwestern has been the site of several advances in this rapidly developing field of microscopy, which inserts solvated nanoscale materials into a closed liquid cell that protects them from the vacuum of the microscope. The liquid cell is enclosed in a silicon chip with small but powerful electrodes that can serve as heating elements to induce thermal reactions, and the chip has a tiny window – 200 x 50 nanometers in size – that allows an electron beam to pass through the liquid cell and create the image.

However, being hit by a beam of electrons will leave a mark. In this case, using more electrons would lead to a clearer picture – since there would be more of them to scatter – but it would also lead to a damaged specimen, especially in the case of radiation-sensitive soft nanomaterials. Suspending the specimen in an organic solvent could protect it from damage, but little is known about how electron beams interact with different solvents.

That’s where Monte Carlo comes in.

Monte Carlo simulations are used to predict outcomes of highly uncertain events. Named for the Mediterranean casino and Formula One racing destination, the technique was actually invented in the 1940s at Los Alamos National Laboratory, where scientists working on nuclear weapons had limited supplies of uranium and an extremely low threshold for trial and error.

Gianneschi’s team used software to model a liquid-cell transmission electron microscope, and then adapted the Monte Carlo simulation to focus on the electrons’ trajectories through three solvents – methanol, water, and dimethylformamide (DMF) – and assess interactions between electrons and solvents. The simulations suggested that water would be the most radiolytically sensitive of the three solvents – meaning that it will react to the electrons and change or even damage the specimen – while methanol would be the most stable, likely to scatter the fewest electrons and generate a clearer image.

These modeled findings were then verified using actual LCTEM, where the researchers could observe the soft nanomaterials as they transformed into worms, micelles and other shapes dictated by solvent conditions – and take detailed notes on their behavior and properties.

But more important than learning about these three solvents is the creation of a method for testing the suitability of any solvent.

“We can use this adapted Monte Carlo method to model the radiolysis of any organic solvent,” Korpanty said. “Then you could understand the solvent effect for any experiment you wanted to do. It’s a huge increase in the scope of what you can study with this form of microscopy.”

“Our findings show that LCTEM is a fantastic way to study soft, solvated nanomaterials,” Gianneschi said. “There’s no other imaging method that gives us this level of understanding of what is happening, how these nanomaterials behave differently from their bulk counterparts, and what we can do to perturb them to access new, as yet undiscovered materials properties.”

Gianneschi also is a professor of biomedical engineering and materials science and engineering in the McCormick School of Engineering and a member of the Chemistry of Life Processes Institute, Simpson Querrey Institute, and Robert H. Lurie Comprehensive Cancer Center of Northwestern University.