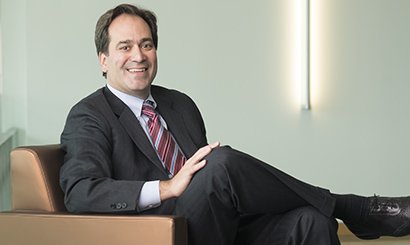 For the second time, Northwestern University’s Chad A. Mirkin, a world-renowned leader in nanotechnology research and its application, has been selected by the U.S. Department of Defense as a fellow in the department’s National Security Science and Engineering Faculty Fellows (NSSEFF) program.

Mirkin, who thrives on collaboration across disciplines, is one of 10 distinguished university faculty scientists and engineers from around the country forming this year’s class. He also was one of six individuals selected in 2008 for the program’s inaugural class, and he is the only person to win this prestigious award twice.

The highly competitive NSSEFF program provides grants to top-tier researchers from U.S. universities to conduct long-term, unclassified, basic research in core science and engineering disciplines that is of strategic importance to the Department of Defense.

Mirkin will receive up to $3 million of direct research support for up to five years for his project, “Functional Crystals Through Encodable Hard and Soft Matter.” This project focuses on using building blocks chemically modified with DNA to program the formation of single crystals that can be used in applications spanning catalysis, lasing, and advanced optics. He is using the well-established base pairing rules of DNA, which gives rise to the famous double helix, to create bonds between building blocks in such a way that he can control almost every aspect of crystallization and the resulting structure.

In addition to his contributions to inorganic chemistry and the development of the Weak-Link Approach to supramolecular coordination chemistry, Mirkin is famed for his invention and development of spherical nucleic acids (nanoscale balls of DNA) and the many medical and biological diagnostic systems based upon them. He is also the inventor and chief developer of Dip-Pen Nanolithography and a suite of high resolution lithographic tools.

He has had an enormous impact on nanoscale manufacturing and applications of nanotechnology in medicine, including cancer detection and treatment. Mirkin is the founder of numerous companies, including AuraSense Therapeutics and Nanosphere, which are commercializing nanotechnology applications in the life science industries. To date, he has over 960 patents and applications, which are the basis for over 1800 commercialized products.