Shawn (Zhao) Irgen-Gioro is a graduate student in the Weiss Lab, which studies the interaction of light with nanostructures for applications in catalysis, electronics, and biological sensing. 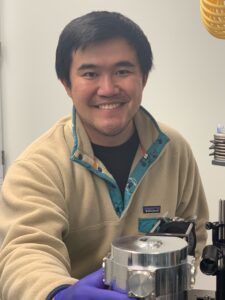 My family moved around a lot, but I went to high school in Bucks County, PA, near Philadelphia. Before then, I went to 6 different elementary schools spread between Pennsylvania, Iowa, New Jersey, and North Carolina.

I graduated from UC-Berkeley with a degree in Physics. I worked in the lab of Prof. Rich Saykally performing broadband UV-SFG and at Lawrence Berkeley National Lab with Dr. Harvey Gould investigating the electron permanent electric dipole moment. I also taught a class called “Quantum Consciousness” with Dr. Justin Riddle under the supervision of Prof. David Presti.

When did you first become interested in chemistry, and how did that lead you to your current work on interaction between light and nanostructures?

Starting grad school, I was initially mostly interested with how light could be used as a probe of intrinsic quantum mechanical properties of molecules and proteins. I was particularly interested in quantum coherence between seemingly different proteins, and how large-scale order could be derived from extended quantum states.

Nanostructures offer an opportunity to try to put what we learned from natural systems into practice. How can we utilize lessons that we have learned from proteins, like the ones found in photosynthesis, to direct how we may make semi-conducting nanocrystals suitable for use in quantum information sciences?

I think all people have experience with the intrinsic balance between information growing from individuals and collective knowledge existing in a platonic fashion. If you have a bunch of coupled masses (masses connected by springs), the overall system has a collective normal mode. If a single mass in the chain is replaced by a different mass, the normal mode would change frequencies. From the perspective of each individual mass, they know something has changed because the normal mode they move at has changed. In this analogy, each individual mass or “site” can be envisioned to be contributing to the collective motion in a bottom-up fashion, but an alternative framing casts the collective mode moving the individuals in a “top-down” way.

This type of information transfer happens all the time on the nanoscale and is the basis for what people call “faster than light” information transfer. It’s not that information is transferring like we are typically used to in a “telephone” causal chain; the receiver and transmitter already were one system to begin with, maintaining their unity under a bombardment of mechanisms trying to decouple them.

In the same way a flock of starling birds can move as one unit rather than having individual birds follow each other in a rippled cascading method of information transfer, my research involves showing how nanostructures, proteins, and hopefully in my independent career, how groups of proteins, neural signals, and people all behave within similar guiding principles.

What are you most excited about in your current research?

I get to work with a group of really talented individuals who all love to think critically about pushing the boundaries of what is possible with nanostructures and how they can be used in quantum information. My colleagues are full of ideas of new things to try, and together we try to pair chemical control of material systems with state-of-the-art methods to probe quantum degrees of freedom.

Working with people you can put trust in allows for bigger projects to come to fruition than what is possible alone. Recently, it seems like the boulder we’ve been collectively pushing has started to gain momentum, and I’m excited to see where we end up.

My biggest highlight has to be the amount of support I have received from my family, friends, other students, postdocs, and professors I have interacted with. I have been fortunate to have been put in really good situations, where I have been uplifted by the people around me to bring me to where I am today. These personal interactions and what I learn from people around me will be my biggest takeaway from my time here.

Grad school is challenging because often there’s no way to get around obstacles, and there’s no shortcut to doing things properly. It’s easy to want to skip the minutia, but I’ve found some of my most interesting results in the weeds. In those moments where I want an easy answer, I remind myself that there’s really nothing quite as freeing as being able to abstractly think about science, and by skipping over details, I’d be missing out on the fun of it all.

Science is done by communities, and we stand on the shoulders of giants. No one would be anywhere without the mentorship of former great scientists, either from afar or within your life. I’ve had great mentors, and I hope that others see me as one as well.

I like working with my hands, whether it be woodworking or sailing. My golf game has gotten better in 2020, while my pre-pandemic hobbies of going to coffee shops and restaurants in the city have taken a hit. Hopefully 2021 brings us opportunities to get together again to see old friends and make new ones.