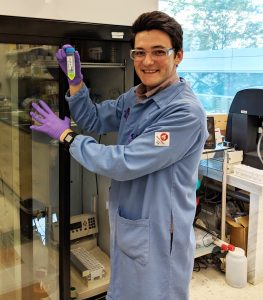 Oliver Hayes is a 3rd year Mirkin Group student working to create new protein-based materials that do not currently exist in nature.

Where are you from, and where did you go to school as an undergraduate?
I grew up in Southeast London and studied chemistry at the University of St. Andrews in Scotland.

How did you become interested in nanotechnology?
Nanotechnology is such a huge, encompassing area of knowledge with so many facets; I think it’s hard to be invested in chemistry and not have a tendency to enjoy nanotechnology research. What drew me to nanotechnology is the interdisciplinary nature of the work. You need input from scientists with different backgrounds—from materials scientists to chemists and bioengineers. I was fascinated by the interfaces between all of these areas, which is where nanotechnology thrives. For example, I recently worked on a project with Mirkin Group colleagues where we worked closely with a researcher in the structural biology core here at Northwestern, Jonathan Remis. We used a technique called cryo-electron microscopy, or cryo-EM, which is a really powerful tool for looking at biomolecules in their native state.

How would you explain what you study to non-scientists?
Over millions of years of evolution, biology has been able to develop some really important materials and functions through the organization of proteins into specific architectures. Proteins are the diverse set of building blocks which are responsible for forming all living systems.  My research focuses on trying to create new protein-based materials that do not currently exist in nature, which is a huge challenge, since methods to do this are limited. In addition, as a PhD student, I am under much more of a time-crunch than nature.

The approach I am taking is to use DNA, another important bio-molecule, to direct the organization of proteins into specific structures. You can think about DNA as chemical information that we can use to instruct how each protein building block recognizes and associates with each other. Hopefully, using this approach, we can begin to realize new protein-based materials and functional systems.

Can you tell me about some of the mentoring relationships you’ve had while at NU?
Luckily, when I came into the Mirkin Group, I worked with a really talented then-third year student, Janet McMillan, who mentored me. I knew very little about proteins before joining the group, so Janet’s mentorship was invaluable to me. She had to endure many naive questions. Over the past two years we have worked really closely, and the project I mentioned earlier was a direct collaboration with her. I’ve also had the opportunity to informally mentor a new student that came into the group named Peter Winegar, who works closely on projects aimed at using DNA to influence protein crystalization. Being able to transfer knowledge to someone who is clearly very able but doesn’t yet have the expertise, but then watching them succeed based on the things that you taught them is really fun to see. They then go on and ask new questions and find answers to those—you get to watch their curiosity unfold while using tools that you gave them. Peer-mentorship is really important in the Mirkin Group and it generates a very collaborative environment. I’m very grateful to those who have helped mentor me along the way, and I hope to mentor more students in the future.

What do you like to do outside of the lab?
I love singing; I was in an a cappella group here at NU and I’m also a member of the Chicago Gay Men’s Chorus. I also like to run, and last summer I took up wind surfing, which was a great decision and a lot of fun!

What is the best part about being in the Mirkin Group?
For me it’s about being able to work with people from many different scientific backgrounds. I get to hear about  research spanning new cancer therapeutics to exotic photonic materials—to be able to learn from such a diverse group of scientists, interact with them, and collaborate with them on my own projects is such a cool, unique experience.  This environment lets you be very creative with your research, which I’ve come to realize is one of the best things about being in this group.