Michael Strauss is a graduate student in the Dichtel Research Group, which uses the tools of synthetic and supramolecular chemistry to address fundamental challenges in the assembly and integration of nanostructured materials. 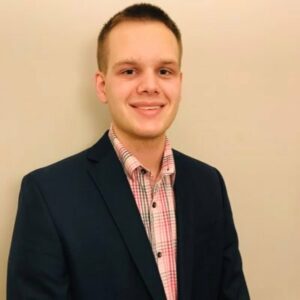 I was born in Madison, WI but at an early age moved to Appleton, WI where I spent the remainder of my childhood until I went to college.

I earned a B.S. in Biochemistry from Winona State University, a small public school in Southeast Minnesota.

I first became interested in chemistry in the classroom of Mrs. Kara Pezzi at Appleton East High School. To this day, I credit her for sparking my interest in the subject, because up until that point I could not stand it.

I then began my undergraduate degree at Winona State with the intention of getting a degree in biochemistry and ultimately going to medical school. That all changed when I took organic chemistry with Prof. Tom Nalli and Prof. Robert Kopitzke. I fell in love with the subject and decided to pursue a career in the hard sciences.

Nanotubes, or long channel-like structures, play a crucial role in transporting ions through biological systems and energy devices. Despite their prevalence, chemists have yet to develop a method to reliably make nanotubes of different sizes, shapes, or intrinsic properties that could be leveraged for some of these applications.

My work focuses on making large ring-shaped molecules and controlling their stacking into the corresponding nanotube. In doing so, we have uncovered a method to make chemically and structurally diverse nanotubes. We have already seen promising results in controlling the transport of protons or lithium-ions along the channels of these nanotubes, a feature that could be used in emerging energy-storage technologies.

You’ve recently published research on strategies to synthesize nanotube structures and investigate their properties. What drew you to this area, and what do you hope to achieve?

Preparing nanotubes of varying shapes, sizes, and chemical functionalities has been a long-standing challenge in supramolecular chemistry because of the potential utility of these structures. Recently, our group has uncovered a method to prepare nanotubes by controlling the stacking of large macrocycles. However, these initial methods were not generalizable to many structures and therefore limited its application relevance.

This recent work used the lessons we learned from previous reports to develop a synthetic method to prepare virtually any nanotube imaginable. In doing so, we developed a platform to investigate the emergent functions and structure-property relationships of these novel materials. Ultimately, we hope to use this general nanotube design to prepare nanotubes with designed and emergent functions.

The highlight of my time at Northwestern has been working with the amazing group of scientists in the Dichtel Group. First, Will is an amazing mentor who has given me the scientific freedom to make my own discoveries, while always being there to provide guidance and insight when I run into a roadblock. Secondly, the members of the Dichtel Group are amazing scientists and friends who have made the last four years nothing but enjoyable.

Self-assembly is not always an easy area of science to explore. There have been plenty of times where an experiment that I thought was going to be a slam-dunk failed miserably. At first, these failures were very disappointing, but taking a step back to think about the problem led to optimizing the experiment and succeeding. This is all part of the scientific process. While failures are disappointing in the moment, using these lessons to design better experiments is what makes this job so rewarding.

When I first joined the Dichtel Group, I was mentored by a 5th year graduate student, Anton Chavez. Anton was extremely patient with me as I learned my way around the lab and continues to be a supporting figure in my scientific career to this day. I do not think I will ever be able to express to him enough how influential he was on my success in graduate school, and for that I will be forever thankful.

As I have moved through the graduate school experience, I have been fortunate to serve as a mentor to many graduate students, namely Emma Roesner and Rich Monsky. It is extremely rewarding to watch these younger students build off of some of my initial discoveries to make discoveries of their own and mature as scientists throughout the process.

Outside of lab I enjoy golfing, playing basketball, playing video games, and spending time with my wife, Abby, and my two cats Aniline and Pipsqueak. (The chemists should be able to figure out which cat I got to name.)