Meet Julia Oktawiec, a postdoctoral scholar in the Gianneschi Group

Julia Oktawiec is a postdoctoral scholar in the Gianneschi Group, which takes an interdisciplinary approach to nanomaterials research with a focus on multifunctional materials with interests that include biomedical applications, programmed interactions with biomolecules and cells, and basic research into nanoscale materials design, synthesis, and characterization. 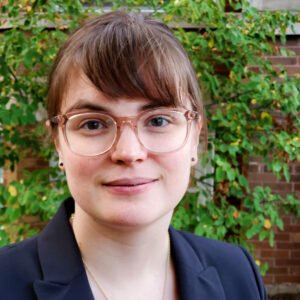 I grew up in Queens, New York City.

When did you first become interested in chemistry, and how did that lead to your current work on polymers and biohybrid materials?

In high school, I had the opportunity to take a summer course on chemistry at Columbia. A highlight was that the class got to take a tour of Brookhaven National Lab, including the National Synchrotron Light Source. The atmosphere of NSLS was really exciting. That was when it clicked for me that being a scientist as a career was an option, and I started becoming more interested, which led to pursuing what opportunities I could.

That led to becoming fascinated by intersections of inorganic chemistry with biology in undergrad. Prof. Ged Parkin, in Columbia’s Department of Chemistry, let me join his lab as a sophomore, and in the process I got to explore the chemistry and reactivity of organometallic zinc complexes, some of which are models for the enzyme carbonic anhydrase. Pivotally, he had a single crystal X-ray diffractometer in his group, so I got trained in X-ray crystallography and ran my own crystals. That focus on structural chemistry was really inspiring to me; in retrospect it became a central part of how I think about scientific problems.

When deciding on grad school, I found myself really intrigued by the possibilities of metal–organic frameworks (MOFs), especially when you think of them as extended inorganic compounds. As a result, I joined Prof. Jeffrey R. Long’s group at UC Berkeley, and worked using MOFs for air separations, using oxygen carrier proteins like hemoglobin as inspiration.  An important part of my projects was studying my materials, as well as collaborators’, using in situ powder X-ray diffraction at Argonne National Laboratory. That was one of the most fulfilling parts of my PhD.

However, in my research, I felt limited by the fact that it was generally easier to study crystalline, well-behaved materials. What happens when you have soft matter that is amorphous and fluxional?  When I learned that biologists have developed all of these amazing tools to understand dynamic proteins and protein assemblies, I got excited by the possibilities. I was reading papers about bioinorganic chemistry that turned more and more bio-focused, and so when the chance came to think about my next steps, I hoped to have the opportunity to learn more about biomaterials and soft matter. The work on peptide-conjugated polymers in Nathan’s lab was especially appealing, given the possibilities of that platform for drug delivery and the opportunity to get the training I was looking for.

In the near future, I hope to gain an improved structural understanding of these polymers that will help guide their design moving forward. In the long-term, I hope to combine my experience in inorganic chemistry, metal–organic frameworks, and biomaterials to design materials that interface all of these areas.

I am trying to understand how to make drugs made out of protein fragments last longer in the body, rather than being broken down.

People in the Gianneschi Lab have found that if you connect the protein fragment, or drug, to a polymer, it is able to stick around for much longer and be more therapeutically effective (like how you can buy extended-release Mucinex or Advil). We hypothesize that this is the case because the polymer protects the drug by rolling it into a ball, but right now we don’t have a lot of concrete evidence proving this. I’m trying to confirm this hypothesis experimentally.

What are you most excited about in your current research?

Right now I’m really excited about getting to try techniques I’ve never done before, like circular dichroism and electron paramagnetic resonance spectroscopy. In these instances I anticipate that these techniques will provide key chemical and structural information on the polymers I’m studying.

Coming from an inorganic chemistry background, where the research in my former group was primarily focused on energy and environmental applications, it’s been really eye-opening to learn about problems in medicine, the wide range of projects that my group members and others are pursuing, and the multitude of techniques available at Northwestern and in the Chicago area through UChicago, UIC, and APS.

Learning how to do research in a new field while navigating pandemic restrictions. It was hardest at the beginning, because I started in the lab when we were all figuring out how to be in lab safely again. However, since then we all have learned a lot about how to best to train and communicate effectively, while still being socially distant. So while there are other challenges that we all are dealing with now, at least for me (and for others as well, hopefully) there are slightly fewer!

In grad school, I mentored two graduate students, particularly in powder X-ray diffraction but also in synthetic chemistry directions. That experience taught me that effective mentorship is difficult but can be incredibly rewarding. One of the hardest parts was recognizing that I had to step back and let my mentees struggle from time to time. Specifically, giving them space to figure things out for themselves, which can be hard when you know the answer (or you know you might reach it much faster). However, they grow a lot through the process and learn much more that way, and overall it’s been very rewarding to see their progress.

I love to knit, and finally knit my first sweater last winter.  I also like watching movies.  During the pandemic I made a point of trying to catch up on movies I hadn’t seen and had kept telling myself I should watch: Silence of the Lambs, Beetlejuice, The Favorite, and Twilight, just to name a few.