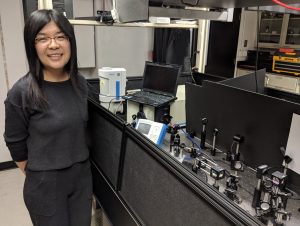 Where are you from?
I’m from China. I had my undergraduate training in China at Nanjing University, which is in the southern part of China. Here at Northwestern, my project is straightforward because my background is in physics and optics. The nanoscale laser project I am working on requires a physical background, and I had some previous training in photonics as an undergrad, so it translated well.

How did you originally become interested in physics?
Physics was something I was fascinated by since middle school, and I even did some simple experiments at home. For example, if you have different levels of water inside a bottle, the resonant frequencies under where you hit are different, and you hear different tones of sounds. That’s maybe the simplest experiment I’d done, at the age of 12. As a child, I was curious about this type of phenomenon in nature. It’s surprising when you realize there’s a simple equation that can explain what you see in life. So that was the motivation I had in the beginning.

Was there ever a point where you questioned whether or not you wanted to remain on that track?
I did. The physics department of Nanjing University is competitive and has a strong reputation. Many of my classmates were accepted by national talent competitions, not from the routine national exams. There was a point when I doubted whether physics was my best talent. When I was a junior student, though, I joined a research group in the materials science division. As I got to know more about the research project beyond the textbook, that pushed me into the research field. Physics is a pretty broad subject, and when you dig into a specific problem and prove your hypothesis with experiments, that is an exciting moment.

Did you work on nanotechnology before your arrival at Northwestern?
Not so much. I was focusing on theoretical modeling during my undergraduate research training, and only after I joined the Odom Group did I get exposed to different methods of nanofabrication. My background is kind of special because I’m a member of both the Odom Group, focusing on experiments, and the Schatz Group, with expertise in modeling. I’m working on nanoscale lasers, the smallest lasers currently in the world. The strategy we use is based on metal nanoparticle arrays, and this allows us to shrink the size of the laser down to the nanoscale. How you can engineer the nanoscale structures and tailor the corresponding optical behavior is amazing.

I’ve had two primary projects so far, and one is based on the engineering of the local nanoscale structure to achieve lasing with different colors simultaneously. As you know, lasers that we see (for example, laser pointers) have only a single color; they’re monochromatic. But in my case, I’m introducing two different length scales into the laser cavity structure, so that we can produce lasing emissions of different colors at the same time. The multicolor laser could be helpful in the future because it carries more information than a single color for optical displays and optical communications. This is my first project, and I was doing experiments, theory, and modeling throughout.

The project I’ve been working on more recently is about the tunability of lasers. Conventional lasers are usually fixed in a specific geometry, and so is the emission color. Recently we’ve been trying to make a laser device that’s stretchable. The underlying mechanism is that the lasing mode we see is determined by the nanoscale inter-particle spacing. If we stretch it, we’re tuning the resonance wavelength for emitting light. It shares the same color-changing mechanism as a chameleon in nature. Chameleons have nanoscale crystals on the surface of their skin, which will influence the color of light that can be reflected and absorbed. Here we were inspired by nature to create lasers that can emit different colors at will.

Can you tell me about challenges you’ve come across in the lab?
It’s exciting when you see a new phenomenon in an experiment, but it’s also a struggle in the beginning to dig into the fundamentals and figure out why it happened. In my case on this multi-color lasing project, it took me a few months to figure out why I saw a few colors at different wavelengths and how that correlated with the unique superlattice structures.

How do you approach a result that puzzles you?
I would say this joint background with both experiment and theory groups really benefits me. When I have some questions in theory, I will go to George (Schatz). He’s knowledgeable in different fields. We’ll talk for a long time and dig into all possible solutions. And then I will be inspired by Teri (Odom) from another perspective of thinking and different experimental approaches. Actually, one day when I went back to look at my old data, there was a sudden a-ha moment when I knew there was something I missed in the previous measurements—it was there already, but I didn’t realize it.

What kind of mentoring have you received while at Northwestern?
Teri and George have different mentoring styles. George is flexible in time, and Teri is more structured. In the Odom group, we have different meetings, ranging from group meetings each week, to subgroup meetings for papers and specific projects. For example, we have individual meetings with Teri, usually once a week. Because it’s a large group, usually we’ll meet all together in an afternoon, and then each of us talks with Teri for around 10 minutes. It’s pretty good training for you to summarize what you did in the past week and discuss future plans efficiently. For the Schatz group, we will stop by George’s office any time after an email, and the discussion usually takes about an hour.

It also makes sense. For the experiment part of a project, you want to follow up each step of and come up with solutions in the quickest way. But for the theory part, you might want to dig into the fundamentals for a long time. I’m carrying both the experimental and theoretical approaches for my projects, and that connection has really benefitted me a lot .

And finally, what’s next?
Right now, I’m looking for a postdoc position in America. In the future, I want to pursue a faculty position either here or back in my home country, China. No matter where, I will continue my adventures in scientific research, like Teri and George.