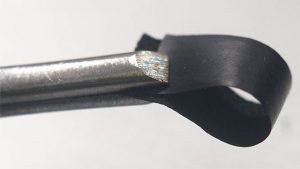 Northwestern University’s Jiaxing Huang is ready to reignite carbon nanotube research. And he’s doing so with a common chemical that was once used in household cleaners.

By using an inexpensive, already mass produced, simple solvent called cresol, Huang has discovered a way to make disperse carbon nanotubes at unprecedentedly high concentrations without the need for additives or harsh chemical reactions to modify the nanotubes. In a surprising twist, Huang also found that as the nanotubes’ concentrations increase, the material transitions from a dilute dispersion to a thick paste, then a free-standing gel and finally a kneadable dough that can be shaped and molded.

The study was published online on May 14 in the Proceedings of the National Academy of Sciences.

Jiaxing Huang“Because of their exceptional mechanical, thermal and electrical properties, carbon nanotubes have attracted a lot of attention for a number of applications,” said Huang, professor of materials science and engineering in Northwestern’s McCormick School of Engineering. “But after decades of research and development, some of the excitement has faded.”

The reason? Carbon nanotubes are notoriously tricky to process — especially in large quantities. About 10,000 times thinner than a human hair, the wiry, tube-shaped structures are said to be stronger than steel and conduct heat and electricity far better than copper. But when mass produced — usually in the form of powders — the tubes twist and clump together. This complication is a major barrier to the material’s widespread applications.

“Aggregated tubes are hard to disperse in solvents,” Huang said. “And if you cannot get a good dispersion, then you won’t be able to make high-quality nanotube thin films that many applications rely on.”

In order to bypass this problem, previous researchers used additives to coat the nanotubes, which chemically altered their surfaces and forced them to separate. Although these methods do work, they leave behind residues or alter the nanotubes’ surface structures, which can blunt their desirable properties.

By contrast, Huang’s team found that cresol does not deteriorate carbon nanotubes’ surface functions. And, after separating the entangled tubes, researchers can simply remove the chemical by washing it off or heating it until it evaporates.

Finding unexpected kneads
After unlocking a new way to make carbon nanotubes in higher and higher concentrations, Huang and his team discovered new forms of the material. As the concentration of carbon nanotubes increases, the material transitions from a dilute dispersion to a spreadable paste to a free-standing gel and finally to a kneadable dough. These various forms can be molded, reshaped or used as conductive ink for 3D printing.

“The dough state of nanotubes is fascinating,” said Kevin Chiou, a graduate student in Huang’s laboratory and first author of the paper. “It can be readily shaped and molded into arbitrary structures just like playdough.”