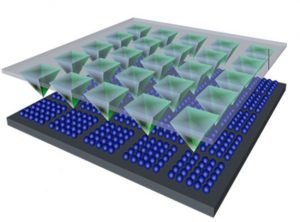 Northwestern University researchers have discovered a new approach for creating important new catalysts to aid in clean energy conversion and storage. The design method also has the potential to impact the discovery of new optical and data storage materials, catalysts that impact pharmaceutical synthesis and catalysts that allow for higher efficiency processing of petroleum products at much lower cost.

Scientists are continually seeking new materials to catalyze (accelerate) the chemical reactions and processes required to create a broad range of products. Identifying and creating a catalyst is complex, especially as the potential number of materials, defined by composition and particle size and shape, is overwhelming.

In this study, researchers looked at the challenges of improving affordability and catalyst efficiency in the conversion and storage of clean energy. Currently, platinum-based (Pt) catalysts are the most effective and commonly used to facilitate a hydrogen evolution reaction (HER), which is, in part, the basis for how fuel cells are used to generate energy. However, as platinum is rare and costly, scientists have been seeking more affordable and efficient alternatives.

“We combined theory, a powerful new tool for synthesizing nanoparticles and more than one metallic element — in this case, an alloy consisting of platinum, copper and gold — to create a catalyst that is seven times more active than state-of-the-art commercial platinum,” said Chad A. Mirkin, the George B. Rathmann Professor of Chemistry in the Weinberg College of Arts and Sciences and the director of the International Institute for Nanotechnology at Northwestern.

The study, published online this week by the Proceedings of the National Academy of Sciences (PNAS), was co-authored by Mirkin; Chris Wolverton, the Jerome B. Cohen Professor of Materials Science and Engineering in Northwestern’s McCormick School of Engineering; and Yijin Kang, an electrochemist and visiting professor from the University of Electronic Science and Technology in China.
Specifically, researchers utilized scanning probe block copolymer lithography (SPBCL), along with density-functional theory (DFT) codes, to design and synthesize the HER catalyst. Invented in Mirkin’s lab at Northwestern, SPBCL enables scientists to control the growth and composition of individual nanoparticles patterned on a surface. The DFT codes outline the structural, magnetic and electronic properties of molecules, materials and defects.

“In addition to providing a new way to catalyze the HER reaction, the paper highlights a novel approach for making and discovering new particle catalysts for almost any industrially important process,” Wolverton said.

This may include providing a clear path to new high-temperature superconductors; structures useful in data storage; materials for solar energy conversion nanostructures to move light around at the tiniest of scales; and new catalysts for converting low-value (affordable) chemicals into high-value products, such as pharmaceuticals and pharmaceutical precursors.

Identifying new materials is essential for driving technological development. The global catalysis market is expected to reach $34.3 billion in the next six years, according to a report by Grand View Research, Inc.

“To find best-in-class materials that drive any application of interest, we need to identify ways to reduce the number of possibilities that will be studied and increase the rate at which they can be explored,” Kang said.

“This combination of theory and nanoscale particle synthesis begins to take on that challenge,” said Mirkin, who also is a professor at McCormick.

Lilang Huang and Peng-Cheng Chen are first authors of the study.