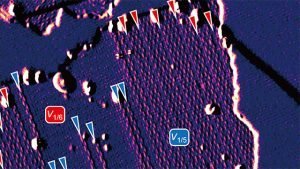 EVANSTON, Ill.—When objects break, they tend not to fix themselves. But a recent study shows that new material borophene might not play by these rules.

When researchers synthesize borophene, the two-dimensional form of boron, in the laboratory, they often observe defects in the material. Northwestern University and Rice University researchers recently discovered that these defects surprisingly assemble into ordered structures that preserve the new material’s unique electronic properties.

“Most theoretical predictions assume that borophene has a perfect crystalline structure,” said Mark Hersam, Walter P. Murphy Professor of Materials Science and Engineering in Northwestern’s McCormick School of Engineering. “But defects are inevitable in borophene, which is grown in the lab, so it’s important to study these defects.”

The research was published today (July 16) in the journal Nature Materials. Hersam led the research. Boris Yakobson, the Karl F. Hasselman Professor of Materials Science and NanoEngineering at Rice, led the theoretical component of the work. Xiaolong Liu, a graduate student in Hersam’s laboratory, served as the paper’s first author.

Since a team of scientists, including Hersam, first synthesized borophene in 2015, the new material has gained attention for its metallic behavior, optical transparency and stretchable, flexible nature. These properties make it ideal for wearable technologies and interactive displays.

Borophene’s three atoms are arranged in a simple triangle. When these triangles link into hexagons, sometimes an atom goes missing — creating a defect in the synthesized material. Hersam’s team investigated forms of borophene with this “hollow hexagon” assembly, specifically observing the most common phases: one atom missing per every five (1/5) triangles and one atom missing per every six (1/6) triangles in the lattice.

The researchers found that at temperatures between 440- and 470-degrees Celsius, both 1/5 and 1/6 phases grew simultaneously on a silver substrate, which acts as a template to guide the deposition into aligned phases. When these phases met, the atoms easily accommodated each other at the boundaries, adopting the structures of their neighbors. These boundary adjustments then gave rise to more exotic — but still metallic — forms of borophene with ratios like 4/21 and 7/36.

“The intermix among phases is very different from what we see in other two-dimensional materials,” said Luqing Wang, a graduate student in Yakobson’s laboratory. “In graphene, these boundaries would be disordered structures, but in borophene, the line defects in effect are a perfect structure for each other.”

“While we did expect some intermixing between the 1/5 and 1/6 phases, the seamless alignment and ordering into periodic structures was surprising,” Hersam said. “In the two-dimensional limit, boron has proven to be an exceptionally rich and interesting materials system.”

Wang’s density functional theory calculations revealed the metallic nature of the line defects, implying that unlike insulating defects in otherwise metallic graphene, they have a minimal effect on borophene’s electronic properties at room temperature. At low temperature, the material shows evidence of a charge density wave, a highly ordered flow of electrons.

“The unique polymorphisms of borophene are on full display in this study,” Yakobson said. “This suggests intriguing interplay in the material’s electronic structure through charge density waves, which may lead to tantalizing switchable electronics.”