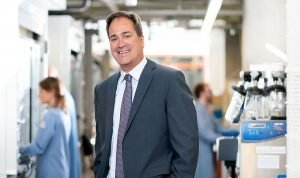 Northwestern University’s Chad A. Mirkin has received the 2019 Netherlands Award for Supramolecular Chemistry for his outstanding discoveries in colloidal crystal engineering with DNA and related supramolecular chemistry contributions.

The award, presented by the Research Center for Functional Molecular Systems, recognizes “outstanding scientists in the supramolecular chemistry field.” As the third recipient of the award, Mirkin, the George B. Rathmann Professor of Chemistry in the Weinberg College of Arts and Sciences and the director of the International Institute for Nanotechnology at Northwestern, joins two Nobel Laureates in chemistry: Jean-Marie Lehn, considered to be the “founding father of supramolecular chemistry,” and Sir Fraser Stoddart, Board of Trustees Professor of Chemistry at Northwestern and architect of the mechanical bond in chemistry.

Mirkin received the honor during the International Conference on Molecular Systems Engineering on Sunday, August 18, in Nijmegen. He also visited universities throughout the Netherlands as part of the lecture series affiliated with the award.

“It is our great privilege to have Chad Mirkin as the third recipient of the Award,” said Bert Meijer, co-director of the Research Center for Functional Molecular Systems and Distinguished University Professor in Molecular Sciences. “His original contributions to science are highly inspiring to many Dutch chemists in the exciting field of supramolecular chemistry.”

“It is a tremendous honor to receive the Netherlands Award for Supramolecular Chemistry and to know that I share this distinction with two titans of chemistry,” said Mirkin. “Professors Lehn and Stoddart have inspired aspects of my work, and I am humbled to join them as a recipient of this prestigious award.”

Mirkin is a world-renowned chemist and expert in nanotechnology, most known for his discovery and development of spherical nucleic acids, and the many medical diagnostic, therapeutic and materials applications that have derived from them; Dip-Pen Nanolithography (recognized by National Geographic as one of the “top 100 scientific discoveries that changed the world”); and numerous other contributions to supramolecular chemistry. Mirkin is the author of more than 730 manuscripts and more than 1,100 patent applications worldwide (more than 310 issued), and he is the founder of seven companies.

His scientific achievements have been recognized with more than more than 130 national and international awards, including the NAS Raymond and Beverly Sackler Prize in Convergence Research, the Dan David Prize (Israel), the Wilhelm Exner Medal (Austria), the RUSNANOPRIZE (Russia), the Friendship Medal (China), the Dickson Prize in Science, the American Institute of Chemists Gold Medal and the $500,000 Lemelson-MIT Prize.

He has served on the editorial advisory boards of more than 20 scholarly journals and is a current associate editor of the Journal of the American Chemical Society and the founding editor of the journal Small, one of the premier international nanotechnology journals. Mirkin has co-edited multiple best-selling books.