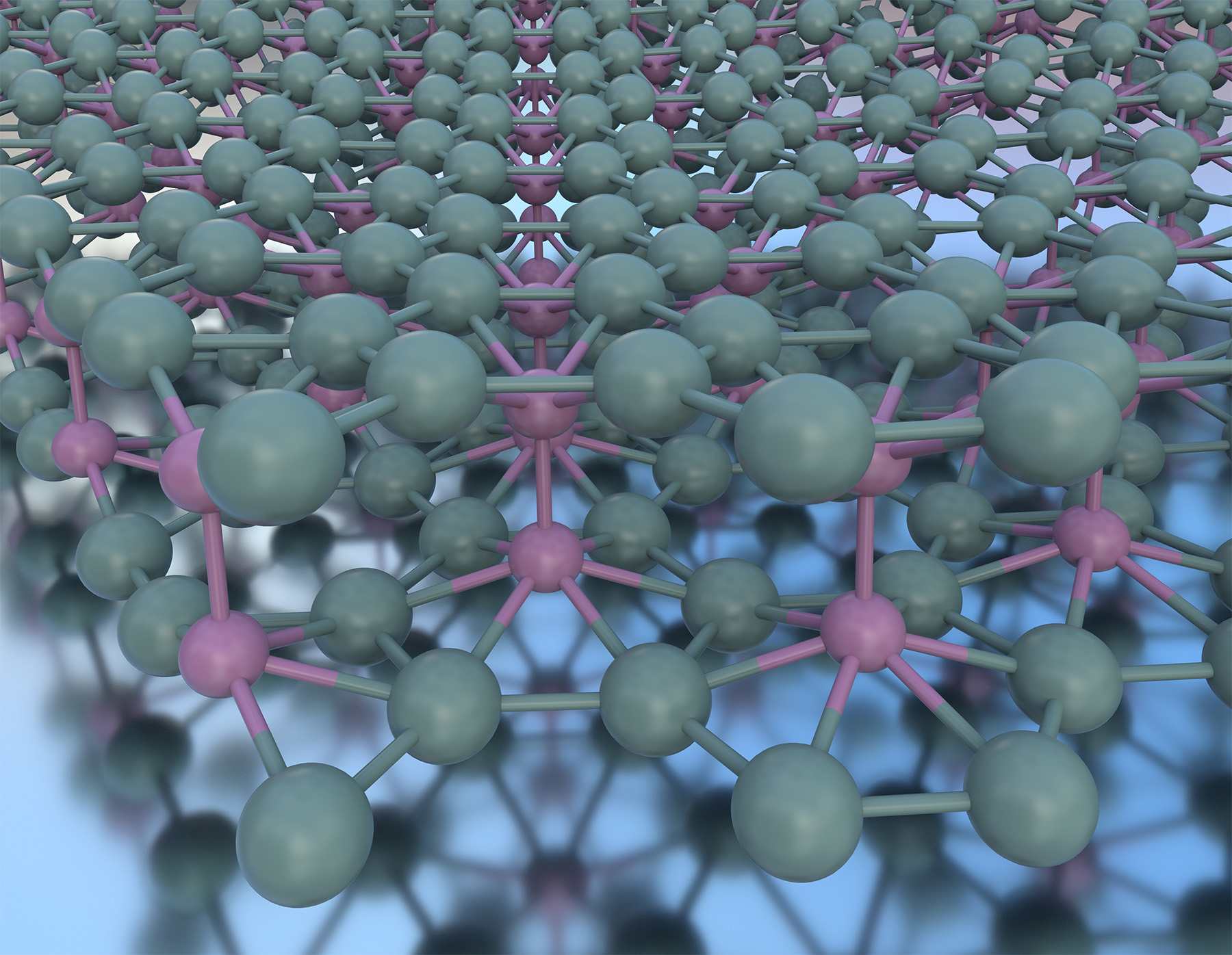 Illustration depicts the atomic structure of double-layer borophene. In this image, all atoms are boron, with the pink boron atoms specifically involved in bonding between the layers.

For the first time, Northwestern University engineers have created a double layer of atomically flat borophene, a feat that defies the natural tendency of boron to form non-planar clusters beyond the single-atomic-layer limit.

Although known for its promising electronic properties, borophene — a single-atom-layer-thick sheet of boron — is challenging to synthesize. Unlike its analog two-dimensional material graphene, which can be peeled away from innately layered graphite using something as simple as scotch tape, borophene cannot merely be peeled away from bulk boron. Instead, borophene must be grown directly onto a substrate.

And if growing one layer was difficult, growing multiple layers of atomically flat borophene seemed impossible. Because bulk boron is not layered like graphite, growing boron beyond single atomic layers leads to clustering rather than planar films.

“When you try to grow a thicker layer, the boron wants to adopt its bulk structure,” said Northwestern’s Mark C. Hersam, co-senior author of the study. “Rather than remaining atomically flat, thicker boron films form particles and clusters. The key was to find growth conditions that prevented the clusters from forming. Until now, we didn’t think you could go beyond one layer. Now we have moved into unexplored territory between the single atomic layer and the bulk, resulting in a new playground for discovery.”

The research will be published Aug. 26 in the journal Nature Materials.

Five years ago, Hersam and his collaborators created borophene for the first time. Stronger, lighter and more flexible than graphene, borophene has the potential to revolutionize batteries, electronics, sensors, solar cells and quantum computing. Although theoretical research predicted that a double layer of borophene was possible, many researchers, including Hersam, were not convinced.

“It is challenging to make a new material, even when theoretical work predicts its existence,” Hersam said. “Theory rarely tells you the synthetic conditions needed to achieve that new structure.”

The key to the correct conditions, Hersam’s team discovered, was the substrate used for growing the material. In the study, Hersam and his colleagues grew borophene on a flat, silver substrate. When exposed to very high temperatures, the silver bunched to form exceptionally flat, large terraces between bunches of atomic-scale steps.

“When we grew borophene on these large, flat terraces, we saw a second layer forming,” Hersam said. “Following that serendipitous observation, we intentionally focused our effort in that direction. We weren’t looking for the second layer when we found it. Many materials discoveries occur in this manner, but you have to realize the opportunity when you stumble upon something unexpected.”

The double-layered material maintained all of borophene’s desirable electronic properties, while offering new advantages. For example, the material comprises two atomic-layer-thick sheets bonded together with space between, which could be used for energy or chemical storage.

“There have been theoretical predictions that bilayer borophene is a promising material for batteries,” Hersam said. “Having space between the layers provides a place to hold lithium ions.”

“Diamonds, graphite, graphene and carbon nanotubes are all based on one element (carbon) with different geometries,” Hersam said. “Boron appears to be just as rich in its possibilities, if not more so, than carbon. We believe that we are still in the early chapters of the two-dimensional boron saga.”