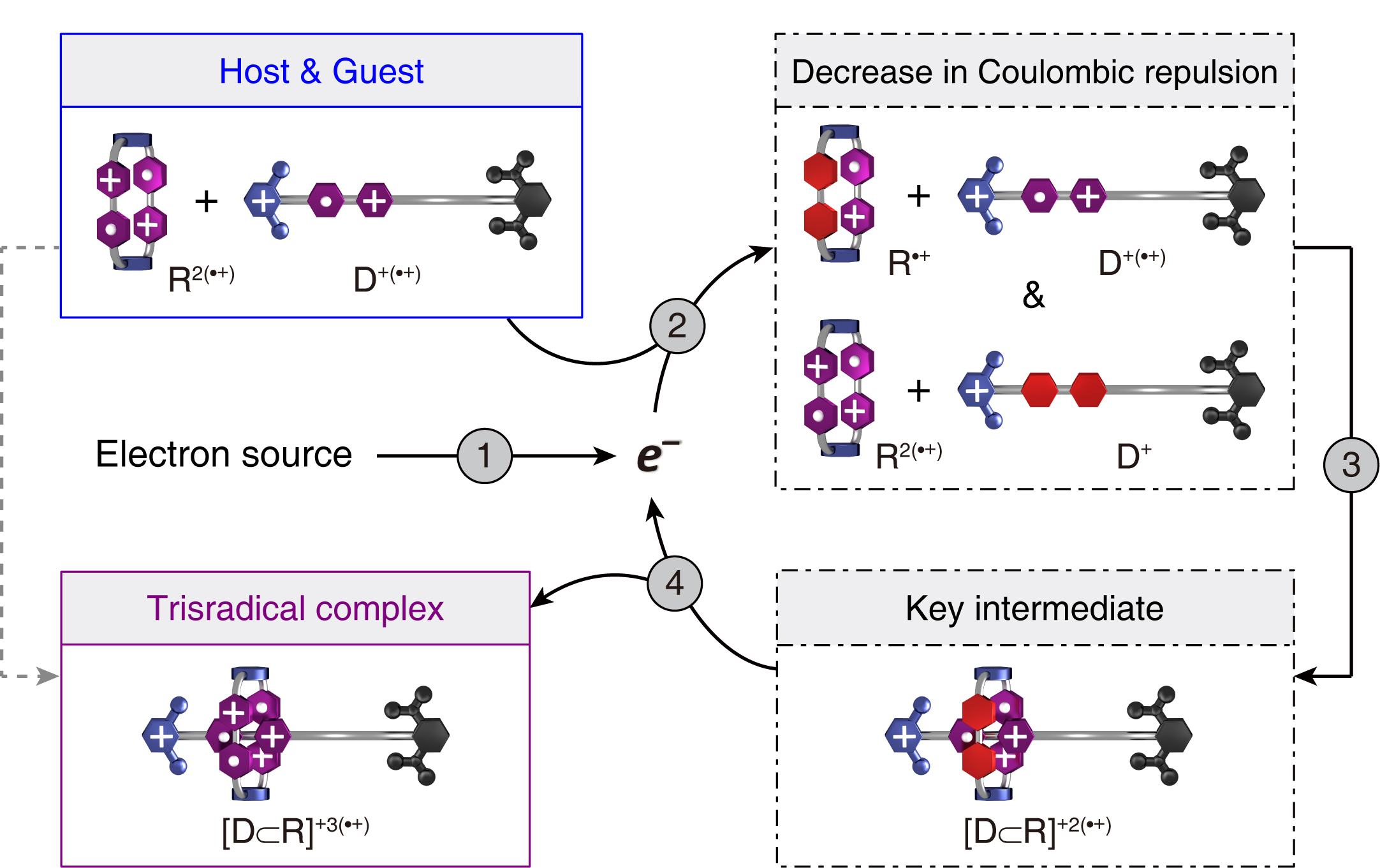 How do you bring together two molecules that positively repel each other? A Northwestern University-led research team has developed a simple and versatile solution: Introduce an electron with a jolt of electricity, and resistance between the two is reduced and a bond formed.

The bond between molecules is admittedly a weak one, of the noncovalent form, but an important one. This kind of bond powers molecular self-assembly, a process used by biology and now scientists to build highly structured, stable and functional arrangements of molecules from the bottom up.

This fundamentally new type of catalysis will offer chemists and biologists a tool for promoting and controlling molecular recognition. New strategies can be designed to fine-tune noncovalent events, control assembly at different length scales and ultimately create new forms of complex matter for use in fields ranging from regenerative medicine to electronics.

“This work represents a major breakthrough in both supramolecular chemistry and catalytic science,” said Northwestern’s Sir Fraser Stoddart, an expert in molecular recognition and self-assembly processes. “It facilitates the coming together of molecules in a highly organized way, which is critical in building complex structures.”

Although widely used in synthetic covalent chemistry, electron catalysis of molecular recognition and self-assembly processes is rare. Now Stoddart and an international team of theoretical physicists and supramolecular, physical and computational chemists have extended that concept to noncovalent chemistry. They are the first to use an electron as a catalyst beyond the molecule.

The study was published recently by the journal Nature.

Co-first authors are Yang Jiao, a postdoctoral fellow, and Yunyan Qiu, a research assistant professor of chemistry, both in Stoddart’s lab.

“This work is about using the electron, an elemental particle, to catalyze the molecular recognition process,” Jiao said. “Molecular recognition and self-assembly are the foundation of many valuable functions and materials. We have figured out a way to promote and control these processes at the most fundamental of levels. Areas such as nanotechnology, chemical biology and materials science stand to benefit from our catalysis.”

A covalent bond is a type of chemical bond that forms when two atoms share an electron pair between them. A noncovalent interaction does not involve the sharing of electrons but instead depends on electromagnetic interactions between molecules or within a molecule. In supramolecular chemistry, molecules are brought together to create superstructures.

In the paper, the researchers describe how they have taken electron catalysis beyond the molecule and into the realm of noncovalent and supramolecular chemistry. The formation of a complex between the two positively charged molecules used in the study (one a large ring-shaped molecule, the other a dumbbell shaped molecule) is kinetically forbidden. How to overcome the fact that like charges repel?

The researchers’ solution is to inject one electron. The electron lowers the resistance between the two molecules, and the two get together to form a new complex. Having done its job, the electron is released and, in typical catalyst behavior, moves on to catalyze another process of molecular recognition. It does this over and over again.

“Previously people cared about thermodynamics, and now we care more about kinetics,” Qiu said. “The best way to control kinetics is by catalysis, and here we use the smallest particle, the electron.”

Electrons can be supplied by an electric current or reductant compounds.

In addition to its simplicity, there are advantages to the electron catalysis approach, the researchers report. The method is not limited to a specific reducing agent; it can be carried out with a variety of different reagents. Also, the electrochemical reduction eliminates the need for reagents altogether and provides the ability to control the concentration distribution of the components in the solution over time.

Stoddart is a member of the International Institute for Nanotechnology and the Robert H. Lurie Comprehensive Cancer Center of Northwestern University.

Fraser Stoddart, Yang Jiao and Yunyan Qiu have filed a patent application based on this work.