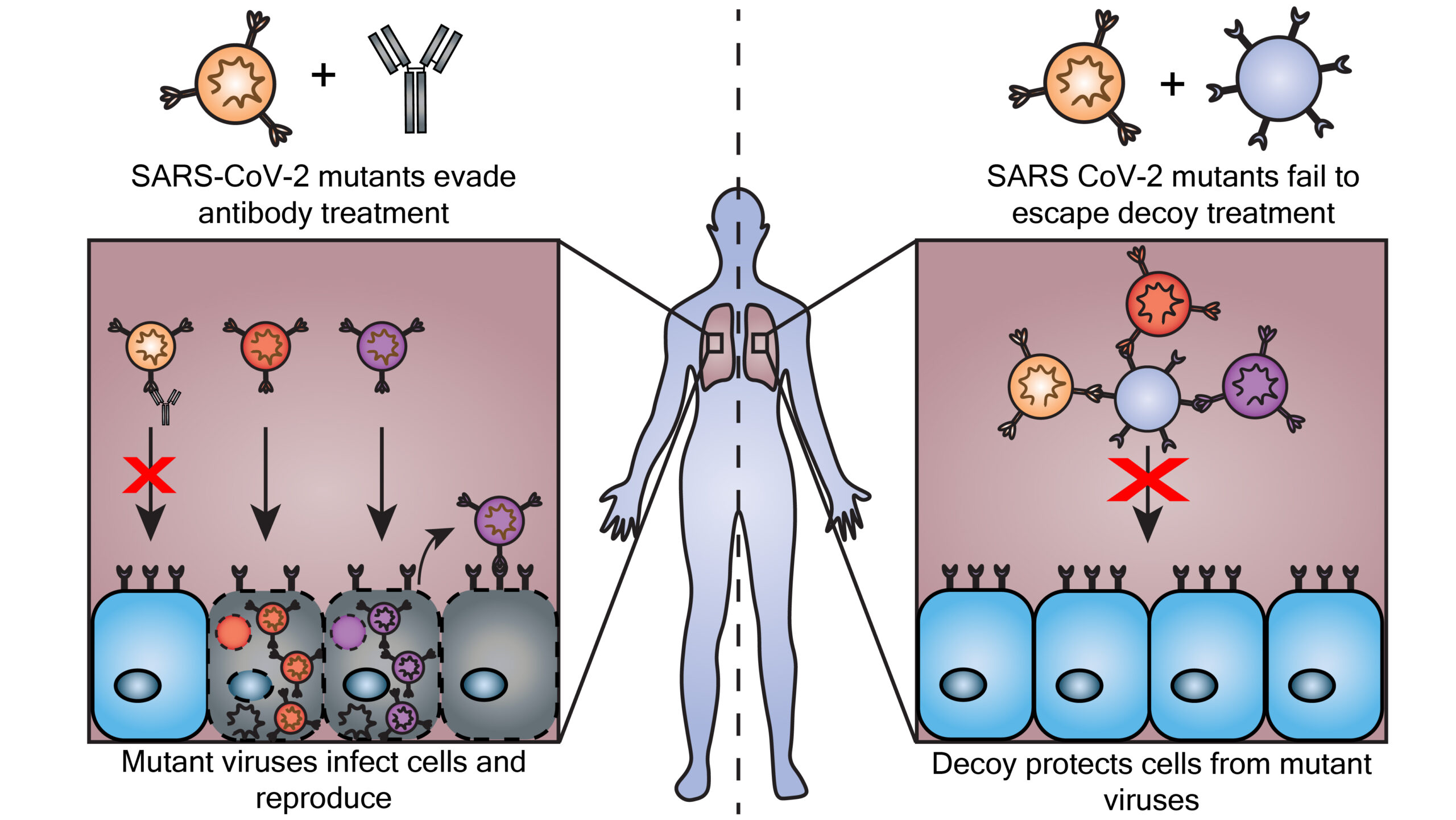 They might look like cells and act like cells. But a new potential COVID-19 treatment is actually a cleverly disguised trickster, which attracts viruses and binds them, rendering them inactive.

As the ever-evolving SARS-CoV-2 virus begins to evade once promising treatments, such as monoclonal antibody therapies, researchers have become more interested in these “decoy” nanoparticles. Mimicking regular cells, decoy nanoparticles soak up viruses like a sponge, inhibiting them from infecting the rest of the body.

In a new study, Northwestern University synthetic biologists set out to elucidate the design rules needed make decoy nanoparticles effective and resistant to viral escape. After designing and testing various iterations, the researchers identified a broad set of decoys — all manufacturable using different methods — that were incredibly effective against the original virus as well as mutant variants.

Although much more research and clinical evaluations are needed, the researchers believe decoy nanoparticle infusions someday could potentially be used to treat patients with severe or prolonged viral infections.

The study was published late last week (April 7) in the journal Small. In the paper, the team tested decoy nanoparticles against the parent SARS-CoV-2 virus and five variants (including beta, delta, delta-plus and lambda) in a cellular culture.

“As we were conducting the study, different variants kept popping up around the world,” added Northwestern’s Neha Kamat, co-senior author of the study. “We kept testing our decoys against the new variants, and they just kept working. It’s very effective.”

‘Evolutionary rock and a hard place’

As the SARS-CoV-2 virus has mutated to create new variants, some treatments have become less effective in fighting the ever-evolving virus. Just last month, the U.S. Food and Drug Administration (FDA) paused several monoclonal antibody treatments, for example, due to their failure against the BA.2 omicron subvariant.

But even where treatments fail, the decoy nanoparticles in the new study never lost effectiveness. Leonard said this is because the decoys put SARS-CoV-2 “between an evolutionary rock and a hard place.”

SARS-CoV-2 infects human cells by binding its infamous spike protein to the human angiotensin-converting enzyme 2 (ACE2) receptor. A protein on the surface of cells, ACE2 provides an entry point for the virus.

To design decoy nanoparticles, the Northwestern team used nanosized particles (extracellular vesicles) naturally released from all cell types. They engineered cells producing these particles to overexpress the gene for ACE2, leading to many ACE2 receptors on the particles’ surfaces. When the virus came into contact with the decoy, it bonded tightly to these receptors rather than to real cells, rendering the virus unable to infect cells.

“For the virus to get into a cell, it has to bind to the ACE2 receptor,” Leonard said. “Decoy nanoparticles present an evolutionary challenge for SARS-CoV-2. The virus would have to come up with an entirely different way to enter cells in order to avoid the need to use ACE2 receptors. There is no obvious evolutionary escape route.”

In addition to being effective against drug-resistant viruses, decoy nanoparticles come with several other benefits. Because they are biological (rather than synthetic) materials, the nanoparticles are less likely to elicit an immune response, which causes inflammation and can interfere with the drug’s efficacy. They also exhibit low toxicity, making them particularly well-suited for use in sustained or repeated administration for treating severely ill patients.

When the COVID-19 pandemic began, researchers and clinicians experienced an unnerving gap between discovering the virus and developing new drugs to treat it. For the next pandemic, decoy nanoparticles could provide a quick, effective treatment before vaccines are developed.

“The decoy strategy is one of the most immediate things you can try,” Leonard said. “As soon as you know the receptor that the virus uses, you can start building decoy particles with those receptors. We could potentially fast-track an approach like this to reduce severe illness and death in the crucial early stages of future viral pandemics.”

The study, “Elucidating design principles for engineering cell-derived vesicles to inhibit SARS-CoV-2 infection,” was supported by the National Science Foundation (grant numbers 1844219 and 1844336) and a gift from Kairos Ventures.