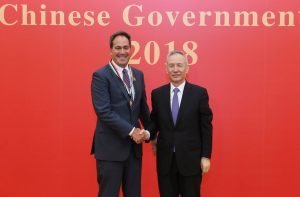 Mirkin, the George B. Rathmann Professor of Chemistry in the Weinberg College of Arts and Sciences and the director of the International Institute for Nanotechnology at Northwestern, is a world-renowned nanotechnology expert. For decades, he has developed nanotechnology solutions for a broad range of applications with his work leading to more than 2,000 commercial products used globally.

Mirkin has trained some of the most accomplished scientists in the field, more than 100 of whom have gone on to pursue careers at major universities throughout the world, including in China.

The Friendship Award, effectively the National Medal of Honor for foreign experts, was presented to Mirkin and 49 other leaders in science and business by Liu He, vice premier of the State Council of the People’s Republic of China, in the Great Hall of the People. On Sunday (Sept. 30), Friendship Award winners met with state leaders before attending the Chinese State Banquet. The award ceremony and dinner are part of Chinese National Day festivities. Mirkin presented Premier Li Keqiang, with a piece of nanoart — a miniaturized, one-molecule high replica of the U.S. and Chinese flags, symbolizing the strong relationship the two countries have shared through scientific endeavors. The gift was made using one of Mirkin’s inventions, polymer pen lithography, commercialized by the Northwestern start-up company, TERA-print.

“As academic science is a form of diplomacy that brings people together from all different parts of the world to pursue knowledge in pre-competitive areas, it is a tremendous honor to receive this recognition from Premier Li and the people of China,” Mirkin said. “I have had the privilege of collaborating with some of the most intelligent and creative Chinese young scientists and students, both in China and at Northwestern. We all share the goal of utilizing nanotechnology to improve medicine, food and water safety, energy efficiency and the environment, for the benefit of people throughout the world.”

“The Northwestern community congratulates Professor Mirkin on receiving this tremendous honor and lauds him for his remarkable achievements and his unwavering commitment to global, collaborative scientific discovery,” Northwestern President Morton Schapiro said. 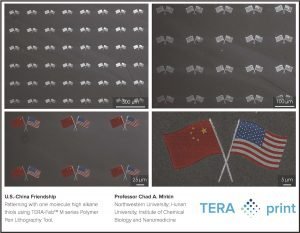 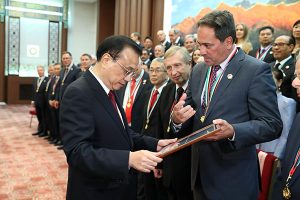 Mirkin is a foreign member of the Chinese Academy of Sciences and an honorary fellow of the Chinese Chemical Society. He is an honorary professor at Jiangnan University; Shanghai Institute of Applied Physics, Chinese Academy of Sciences; Shanghai Tech University; and Hunan University, where he also is advisory co-director of the Institute of Chemical Biology and Nanomedicine.

Mirkin has taught more than 60 Chinese students at Northwestern – graduate students, doctoral candidates, postdoctoral students and fellows. He has given hundreds of seminars at universities and professional meetings in China, and he holds 11 Chinese patents.

Earlier this year, Mirkin received the Nano Research Award, along with Chinese Academy of Sciences Professor Lei Jiang, at the Sino-US Nano Forum in Chendu, China.

In receiving the Friendship Award, Mirkin joins a list of prominent scientists including Alan MacDiarmid, who won the Nobel Prize for Chemistry in 2000; Stanford University Professor Richard Zare; and University of Utah Professor Peter J. Stang, who is editor-in-chief of the Journal of the American Chemical Society.

Mirkin is most known for his discovery and development of spherical nucleic acids, and the many medical diagnostic, therapeutic and materials applications that have derived from them; Dip-Pen Nanolithography (recognized by National Geographic as one of the “top 100 scientific discoveries that changed the world”); and numerous other contributions to supramolecular chemistry. Mirkin is the author of more than 700 manuscripts and more than 1,000 patent applications worldwide (more than 310 issued), and he is the founder of multiple companies.

Mirkin’s scientific achievements have been recognized with more than more than 130 national and international awards, including the Raymond and Beverly Sackler Prize in Convergence Research, the Dan David Prize, the Wilhelm Exner Medal, the RUSNANOPRIZE, the Dickson Prize in Science, the American Institute of Chemists Gold Medal and the $500,000 Lemelson-MIT Prize.

He has served on the editorial advisory boards of more than 20 scholarly journals and is the current associate editor of the Journal of the American Chemical Society and the founding editor of the journal Small, one of the premier international nanotechnology journals. Mirkin has co-edited multiple best-selling book