Face mask aims to deactivate virus to protect others

In the pandemic, people wear face masks to respect and protect others — not merely to protect themselves, says a team of Northwestern University researchers.

With this in mind, the researchers developed a new concept for a mask that aims to make the wearer less infectious. The central idea, which received support from the National Science Foundation through a RAPID grant, is to modify mask fabrics with anti-viral chemicals that can sanitize exhaled, escaped respiratory droplets.

By simulating inhalation, exhalation, coughs and sneezes in the laboratory, the researchers found that non-woven fabrics used in most masks work well to demonstrate the concept. A lint-free wipe with just 19% fiber density, for example, sanitized up to 82% of escaped respiratory droplets by volume. Such fabrics do not make breathing more difficult, and the on-mask chemicals did not detach during simulated inhalation experiments.

The research was published today (Oct. 29) in the journal Matter.

Importance of protecting others

“Masks are perhaps the most important component of the personal protective equipment (PPE) needed to fight a pandemic,” said Northwestern’s Jiaxing Huang, who led the study. “We quickly realized that a mask not only protects the person wearing it, but much more importantly, it protects others from being exposed to the droplets (and germs) released by the wearer. 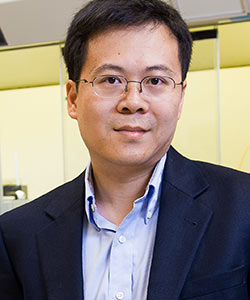 “There seems to be quite some confusion about mask wearing, as some people don’t think they need personal protection,” Huang added. “Perhaps we should call it public health equipment (PHE) instead of PPE.”

Huang is a professor of materials science and engineering in Northwestern’s McCormick School of Engineering and a member of the steering committee at the International Institute for Nanotechnology. Graduate student Haiyue Huang and postdoctoral fellow Hun Park, both members of Huang’s laboratory, are co-first authors of the paper.

“Where there is an outbreak of infectious respiratory disease, controlling the source is most effective in preventing viral spread,” said Haiyue Huang, a 2020 Ryan Fellowship Awardee. “After they leave the source, respiratory droplets become more diffuse and more difficult to control.”

The goal and results

Although masks can block or reroute exhaled respiratory droplets, many droplets (and their embedded viruses) still escape. From there, virus-laden droplets can infect another person directly or land on surfaces to indirectly infect others. Huang’s team aimed to chemically alter the escape droplets to make the viruses inactivate more quickly.

To accomplish this, Huang sought to design a mask fabric that: (1) Would not make breathing more difficult, (2) Can load molecular anti-viral agents such as acid and metal ions that can readily dissolve in escaped droplets, and (3) Do not contain volatile chemicals or easily detachable materials that could be inhaled by the wearer.

After performing multiple experiments, Huang and his team selected two well-known antiviral chemicals: phosphoric acid and copper salt. These non-volatile chemicals were appealing because neither can be vaporized and then potentially inhaled. And both create a local chemical environment that is unfavorable for viruses.

“Virus structures are actually very delicate and ‘brittle,’” Huang said. “If any part of the virus malfunctions, then it loses the ability to infect.”

Huang’s team grew a layer of a conducting polymer polyaniline on the surface of the mask fabric fibers. The material adheres strongly to the fibers, acting as reservoirs for acid and copper salts. The researchers found that even loose fabrics with low-fiber packing densities of about 11%, such as medical gauze, still altered 28% of exhaled respiratory droplets by volume. For tighter fabrics, such as lint-free wipes (the type of fabrics typically used in the lab for cleaning), 82% of respiratory droplets were modified.

“As an adviser, I must admit that I did not see all the technical challenges coming,” Huang said. “But I am very pleased that my team members have exhibited amazing drive and creativity to tackle those difficulties and get the work done.”

One unexpected difficulty was how to measure and quantify the degree of chemical modification of escaped droplets. “For acid-modified droplets, I thought we could do this simply by collecting them on a pH paper and seeing the color changes of the landed droplets,” Huang said. “I insisted that Haiyue and Hun should try this first, and only to realize that it wasted a few weeks of their time.”

Park noted yet another problem: “The droplets tend to spread out on pH papers, leaving barely detectable drying marks, and the pH dyes do not have enough color intensity to generate a clear contrast of the dried droplets under optical microscope. So it was very difficult to even ‘see’ the droplets, let alone determine the acid content in them.”

Then Park and Haiyue Huang realized that polyaniline — the polymer they used to coat the fabrics — is a great color indicator for acid itself as it turns from dark blue to green.

“I was laughing at myself when I found out their new idea — I should have thought about it much earlier,” Huang said. “I was even more impressed that Haiyue and Hun quickly invented a new way to make ultrasmooth and uniform polyaniline films that work perfectly as a colorimetric indictor for microscopy observation of acidic droplets.”

With this breakthrough, the team was able to generate hundreds of microscopy images. Next, Yihan Liu, a master’s student in Huang’s lab joined the project remotely, working from home to develop imaging analysis algorithms to quantity how much the escaped droplets are modified.

“I was stuck home in the spring and summer anyway, so I was very glad that I can make some good use of myself to help out the project,” Liu said. “My parents were pleased to learn that I was not only safe, and also doing something meaningful. I have lived up to their support of my tuition!”

Earlier this year, Huang engaged a team of clinical and biomedical researchers overseas with frontline COVID-19 experiences to discuss his hypotheses, propose research needs and even potential solutions. Together, the researchers published their ideas the journal ACS Nano.

Huang hopes the current work provides a scientific foundation for other researchers, particularly in other parts of the world, to develop their own versions of this chemical modulation strategy and test it further with viral samples or even with patients.

“Our research has become an open knowledge, and we will love to see more people joining this effort to develop tools for strengthening public health responses,” Huang said. “The work is done nearly entirely in lab during campus shutdown. We hope to show researchers in non-biological side of science and engineering and those without many resources or connections that they can also contribute their energy and talent.”

This work was mainly supported by the National Science Foundation (RAPID DMR-2026944).