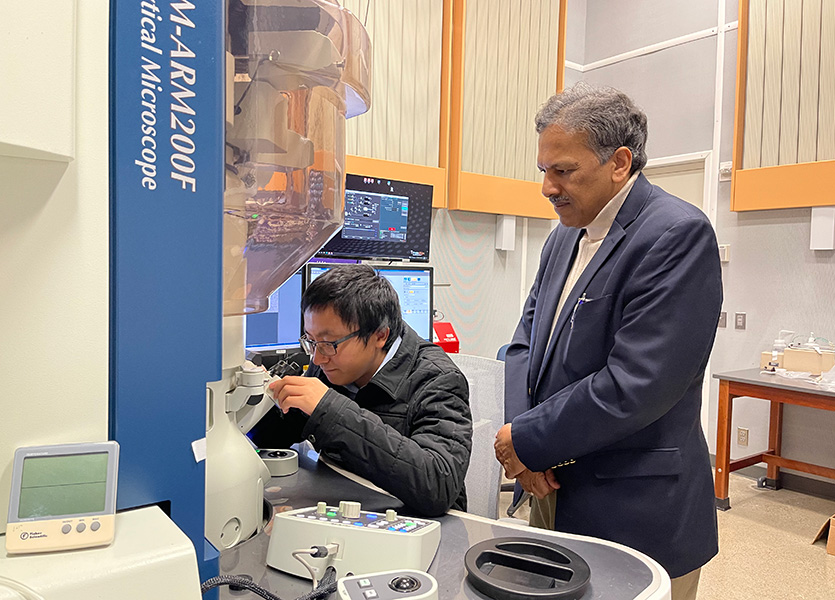 Xiaobing Hu and Vinayak P. Dravid are shown collaborating on their research.

Global warming is an existential threat to life on Earth. As our planet further industrializes, the release of greenhouse gases continues to rise. One of the foremost of those gases is carbon dioxide, which can be trapped in the form of calcium carbonate (which already makes up around 4 percent of Earth’s crust).

Recent work from a team that included Northwestern Engineering’s Vinayak P. Dravid and Xiaobing Hu provides insight into the formation of defects in calcium carbonate. By learning how calcium carbonate behaves and the properties of its defects, researchers could develop more effective strategies to design synthetic aragonite with better mechanical performance.

“Understanding what calcium carbonate looks like and how it behaves at the atomic scale is helpful to understand how carbon dioxide sequestration will be stable in thousands of years,” Dravid said. “The defects can mess up the material, so we need to be watchful to see how defects in calcium carbonate would behave in the context of climate change in the future.”

Dravid and Hu and their counterparts at the Institute of Metal Research, Chinese Academy of Sciences (IMR CAS) did this by studying nacre, a tough representative composite material mainly made of aragonite — a natural crystal form of calcium carbonate. Understanding the defects in calcium carbonate will be helpful not just to the materials science community, but also to researchers who investigate ways to slow climate change, and also those who study plate tectonics.

Dravid and Hu presented their findings in the paper “Uncovering the Crystal Defects Within Aragonite CaCO3,” published March 31 in the Proceedings of the National Academy of Sciences.

Nacre, an extremely tough substance that forms inside the shells of sea animals, is commonly known as mother-of-pearl and is frequently used in high-end jewelry. It also exhibits excellent penetration resistance and an unusual combination of mechanical strength. Nacre’s mechanical performance is attributed to the coordinated deformation mechanisms working together in characteristic microstructures at multiple length scales, ranging from micrometer scale to atomic scale.

Calcium carbonate, found in nacre, is pervasive, but to understand its defects at the atomic scale, the compound must be exposed to electrons, which can damage its chemical makeup. Using sensitive but complementary detectors at both NUANCE and IMR CAS, the researchers imaged aragonite and discovered more about calcium carbonate’s defects.

Using techniques called aberration corrected transmission electron microscopy, crystallographic analysis, and theoretical calculations, Dravid and Hu found various defects within aragonite at the atomic scale and the defects’ potential impact on calcium carbonate deformation. They identified complete twin elements, characters of twinning disconnection and the corresponding twin shear angle, and rationalized unique partial dislocations. The research also revealed an unreported potential energy dissipation mode within aragonite, namely the formation of nanograins via the pileup of partial dislocations. The aforementioned crystallographic features are essential for gaining the deeper understanding of the deformation behavior in nacre and the defect phenomena in carbonates, considered for long-term storage of carbon.

Five years ago, Dravid said, this kind of research wouldn’t have been technologically possible.

“The capabilities at NUANCE, coupled with the skills of Xiaobing, we were able to make these breakthroughs,” Dravid said. “I often say you can buy a Ferrari, but it takes a Michael Schumacher to win races. Xiaobing is our Michael Schumacher. Our microscopes are the Ferraris.”

These findings will allow evaluations of the role and contributions of intrinsic defects including partial dislocations, stacking faults, twinning, and low-angle grain boundaries on the overall mechanical performance of nacre. Further, planar defects in aragonite such as stacking faults and twining are beneficial for mechanical performance. The defects and associated diffusive phenomena will play a role in long-term phase stability of carbonates that are being explored for long-term carbon capture and sequestration.

“Tailoring the density of these planar defects will be the holy grail of synthetic aragonite,” Hu said. “Until now, there were no clear guidelines regarding the control of defect density. Our atomic scale insight of aragonite will allow researchers to build suitable models to uncover the potential external factors of formation energy of these defects. Uncovering the relationships between external factors and defect formation will enable researchers to further explore the exact relationship between the growth conditions and defect density.”