Joe DeSimone has been awarded the 2015 Kabiller Prize in Nanoscience & Nanomedicine for his groundbreaking work in nano-biomaterials and their application to medicine.

One of his most notable inventions is PRINT (Particle Replication in Non-Wetting Templates) technology. The invention resulted from a recognition of a problem – the gulf that existed between current polymer technologies and medicine, and a willingness to look outside the box to address it.

Joe DeSimone is a person that likes to solve problems and he comes by this naturally. His mother was an accountant and his father a tailor – both were meticulous and loved fixing things. Born in Pennsylvania, a state he still calls “home”, Joe got interested in science in high school, when he discovered that he could understand the concepts easily. He went to Ursinus – a small liberal arts college ten miles from home that just happened to be the only school on the east coast to offer a polymer chemistry program. This exposure to polymer science led him to pursue a Ph.D. in chemistry from Virginia Polytechnic Institute and State University in Blacksburg, Va.

In 1986, Joe completed his undergraduate program in May, and married his wife Suzanne in June. He completed his Ph.D. program in 1990, and at the young age of 25 joined the faculty at the University of North Carolina at Chapel Hill (UNC). As an assistant professor in chemistry, he launched the university’s polymer program with his colleague Dr. Edward Samulski. Today, Joe is the Chancellor’s Eminent Professor of Chemistry at the University of North Carolina at Chapel Hill, and William R. Kenan, Jr. Distinguished Professor of Chemical Engineering at North Carolina State University and of Chemistry at UNC. He is also an adjunct member at Memorial Sloan-Kettering Cancer Center.

The PRINT process includes making a master template using the lithographic tools from the semiconductor industry, making molds from the templates, filling the cavities in the molds with chemical compounds that will become the precursor to a vaccine or medicine, and then harvesting the nanoparticles for use in medical applications. Since the human body has natural defenses against foreign objects that are often both size and shape specific, having the ability to produce size and shape specific nanocarriers increases their therapeutic efficacy. For the first time, it was possible with PRINT technology to make precisely defined nanoparticles of any size, shape, or chemical composition. Joe co-founded Liquidia Technologies with a team of researchers from UNC to make the technology available in the market. Today, Liquidia is using the PRINT technology toward the development of new cancer treatments; inhalable therapeutics for treating pulmonary diseases such as cystic fibrosis, asthma, COPD, and pulmonary hypertension; and next generation vaccines for malaria, pneumonia, and dengue.

Joe is one of less than twenty individuals to be named to all three branches of the National Academies: National Academy of Medicine (2014), National Academy of Sciences (2012) and the National Academy of Engineering (2005). He is also a member of the American Academy of Arts and Sciences (2005). He has received over 50 major awards and recognitions, has published over 300 scientific articles, and has over 150 issued patents in his name with over 100 patents pending. He is also the co-founder of several companies including Micell Technologies, Bioabsorbable Vascular Solutions, Liquidia Technologies and Carbon3D. In addition to his research, Joe counts mentorship of his students as one of his most valued achievements. To-date he has advised more than 70 postdoctoral researchers, more than 70 Ph.D. candidates, 14 M.S. theses and more than 50 undergraduate students. A compelling aspect of Joe’s mentorship is that ~half of the students he has mentored through Ph.D. completion have been from underrepresented groups in STEM fields.

He and his wife Suzanne have two children, Philip who is 26, and Emily who is 22.

Joe is currently on sabbatical from UNC and acting as CEO of Carbon3D in California, a new company that is launching Joe’s most recent invention – a process that combines molecular science with hardware and software technologies to advance 3D printing beyond basic prototyping to 3D manufacturing. 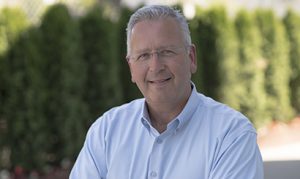 “I’m thrilled and humbled to be recognized with the inaugural Kabiller Prize by such a world class institution as Northwestern’s International Institute for Nanotechnology.

“The PRINT technology invented in my lab continues to be developed for many different applications to improve human health. My students are leading that charge. This recognition is really a testament to their brilliant efforts.”