Although the term ‘nano’ was not yet in use, scientists in the 19th century were beginning to take advantage of the possibilities offered by nanomaterials — leading to inventions that would change the world.

Photography is an early example of nanotechnology. It depends on the production of silver nanoparticles sensitive to light.

Photographic film is a thin layer of gelatin containing silver halides and a base of transparent cellulose acetate. The light decomposes the silver halides, producing nanoparticles of silver, which are the pixels of the photographic image.

In the late eighteenth century, the British scientists Thomas Wedgewood and Sir Humphry Davy were able to produce images using silver nitrate and chloride, but their images were not permanent.

The first successful photograph was produced in 1827 by Joseph Niépce using material that hardened on exposure to light. This picture required an exposure of eight hours. Niépce went into partnership with Louis Daguerre. Although Niépce died of a stroke only four years later, Daguerre continued to experiment, and, in 1839, discovered a way of developing photographic plates, a process which greatly reduced the exposure time from eight hours to half an hour. He also discovered that an image could be made permanent by immersing it in salt. 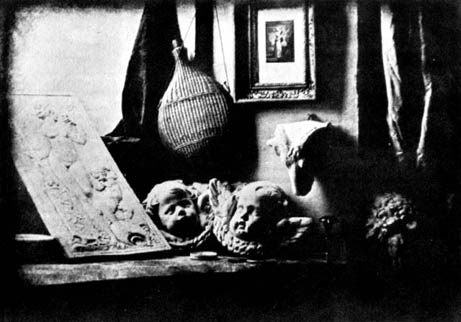 Earliest surviving daguerreotype still in existence. This still life was taken by Louis Daguerre in his studio in 1839.

The English chemist and physicist Michael Faraday discovered and prepared the first metallic colloids in 1856.

Colloids are fine particles that suspend in a solution (in between particles that dissolve in solution and those that settle). Faraday’s gold colloids had special electronic and optical properties. They are now known as one of the most interesting nanoparticles.

Considered by many to be one of the greatest experimentalists who ever lived, Faraday received little more than a primary education, and at the age of 14 was apprenticed to a bookbinder. There he became interested in the physical and chemical works of the time.

After hearing a lecture by the famous chemist Humphrey Davy, Faraday sent Davy the notes he had made of his lectures. This earned Faraday an appointment as Davy’s assistant in the laboratory of the Royal Institution in London, at the age of 21 — the birth of a great career.

The entire set of specimens (over 600) used by Faraday in his 1856 research are still housed at the Royal Institution of Great Britain.