The development of new medications brings numerous challenges. One key obstacle is that cells of the immune system will rapidly remove drugs and nanoparticles from circulation, resulting in less of the drug getting to the intended therapeutic target and generating unwanted side effects.

Recent work from a group of Northwestern Engineering researchers could help solve that issue.

A team led by Evan Scott, the Kay Davis Professor of Biomedical Engineering and Microbiology-Immunology and an affiliated faculty member of the International Institute for Nanotechnology, and his biomedical engineering PhD student Michael Vincent demonstrated that the extent to which a common protein found in blood unravels on the surfaces of drug delivery vehicles will determine how such nanocarriers distribute throughout the body. Engineering drug nanocarriers to either stabilize or unravel albumin — a protein that helps maintain osmotic pressure in the bloodstream — can tune the nanocarrier’s cellular interactions and circulation time. Leveraging these relationships may improve drug specificity, decrease dosage, and minimize adverse outcomes for patients receiving treatments for a variety of diseases, particularly those requiring intravenous drug administration. 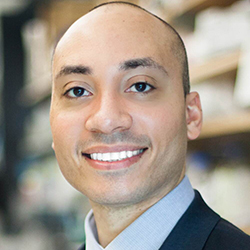 “Our findings can be used to develop drug delivery vehicles that selectively engage or evade the immune system in specific ways and control their circulation time in blood,” Scott said.

When nanocarriers are injected into the blood, proteins will stick to their surfaces and change their structure and shape, which alerts the immune system of the presence of a foreign material. It is well established that nanocarriers first become coated with the most abundant blood protein, serum albumin, but this is usually considered to be an inert interaction. Scott’s research built on that knowledge, finding that this inertness is highly dependent on the chemistry of the nanocarrier.

In contrast, surface chemistries that stabilize albumin were shown to evade this receptor-mediated clearance mechanism and prolonged nanocarrier circulation in blood.

“We found that surfaces modified with phosphate groups are able to maintain albumin structure and avoid its denaturation,” Scott said. “This presents a novel method of controlling the clearance and biodistribution of nanocarriers, and thus their delivered therapeutics.”

Previously, it was thought that albumin coatings only had a stealth effect that enabled drug delivery vehicles to circulate in blood for a longer period of time. This became the conventional thinking, Scott said, even though no one had investigated if there were conditions where albumin coatings actually accelerate nanocarrier clearance. Scott and Vincent demonstrated that the folding state of albumin at the nanocarrier surface is indeed a controllable surface property that can be exploited to meet diverse challenges in drug delivery.

Read at McCormick School of Engineering